Difference between revisions of "View-builder vocabulary" 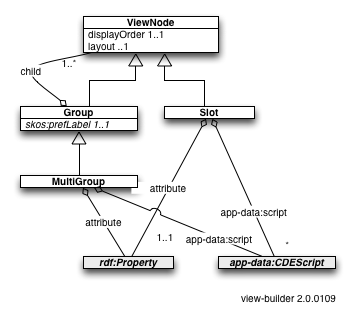 Each Slot or MultiGroup holds an attribute A. In order to display the slot both the form and the value of A must be retrieved. The value might be a boolean, a string, etc. The form of A is described by attribute metadata (as described in Attribute Metadata and in Attribute Definitions) --a set of attributes about A. How to retrieve the value of A is out of the scope of this document. We are concerned here about how to retreive the form of A.

The reality is that depending on the site-specific connection context where the attribute is used, the cardinality restrictions may be different. For example, in a connection context to a specific website, say, amazon.com, they may ask for an address but not require the country to be specified. In this case the view-builder-powered form might (based on the UI designer's preference) either (a) simply omit the country field or (b) include the country field but indicate that it is not required.