Difference between revisions of "User:Nick" 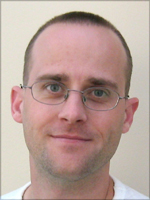 Nick Edgar is the lead for the Eclipse Rich Client Platform User Interface. He is a senior developer with IBM Ottawa labs (formerly known as Object Technology International) since 1992, and has played an active role in Eclipse since its inception, working on various aspects of the Runtime, UI, and Rich Client Platform. Nick was also involved in the development of Envy/Developer, IBM Smalltalk, VisualAge for Java, and VisualAge Micro Edition.