Difference between revisions of "Scout/Contribution"

The Eclipse wiki gives a good detailed overview of the various ways you can contribute to a project:

The typical Eclipse Scout contributor will go through the following steps:

1) Before you do anything related to bugs please have a look at the Eclipse Bugzilla FAQ.

2) Before you open a new Scout bug, please try to scan through the known bugs to verify that you are not reporting a bug that is already known for Eclipse Scout. See next section.

For your convenience a number of links are provided below:

Lack of any of the above characteristics is considered poor quality. A drastic example (taken from [1]) reads as follows:

Good guidelines on how to write a bug may be found here:

When you cannot find an existing bug, feel free to open a new bug:

Select the component according to the following criteria

Choose the Scout version that you are having the issue with. Next the Scout release coming with Kepler (june 2013) this would be 3.9.0.

If you are using an older version of Eclipse Scout, there is no more release planned, but relevant bugs will still be fixed on these branches.

Severity is assigned by a user and describes the level of impact the bug is having on them, the Eclipse Scout project has defined following meanings:

Use a decent Summary line

Helps a lot to identify the bug in a large list of bugs. Good example: SWT: Columns with an active filter should be identifiable. Bad example: Layout.

In case the bug relates to a specific Scout runtime UI please use one of the following prefixes:

Consult the Eclipse wiki for a diagram showing the possible bug live cycles.

[Contributor] After starting to work on a Bug

[Contributor] After having pushed to Gerrit

[Committer] After having submitted the change in Gerrit

After having submitted the Gerrit change in Gerrit, the committer should:

[Tester] After having tested

How do I test?

Now is a good time to (re)read the bugzilla and verify that the implemented solution actually solves the problem(s).

Please test the change in a Scout application. The binary form (.jar) should be tested (continuous job, milestone release...)

Test on all branches where the ticket was applied.

How do I report the results?

Find the version of a plugin

With CTRL-Shift-A you can look for any scout bundle in your target platform. Select the bundle that should contain your modification. Click OK.

In the Manifest editor, you can copy the exact version. The timestamp you see in the version is corresponding to the last commit for this bundle. 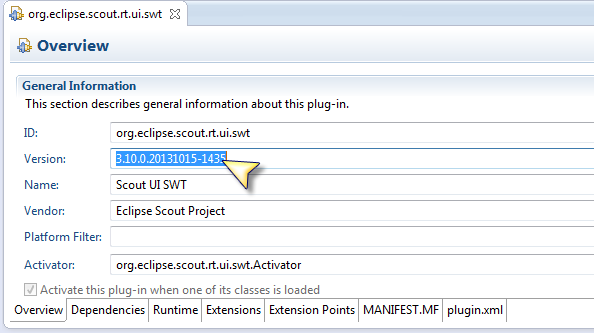 Use the Bugzilla feature to reassign the assignee to default.

Getting the Scout Sources

We are using git at eclipse: [1]. How to setup your environment to compile the sources and contribute see Setup.

Patches (new features or bugfixes) should be contributed using Gerrit. (You do not need to attach a patch file to bugzilla anymore.) Setup your development environment, make your changes and push to gerrit. See Git Workflows instructions on how to push your code.

Specifically, you need to:

I have provided a Patch. Now What?

If you have attached a patch to a bugzilla ticket and are not satisfied with it's progress (read: nobody seems to notice after a week or so): Nudge us in the Scout forum, and please allow for some more days. We will then find a committer for your bug and figure out the next steps together.

To list the currently pending patches you may use this query

We encourage Eclipse Scout developers and contributors to take the "better to ask for forgiveness than permission" approach to adding and updating wiki documentation.

A forum thread has a very short life time (sometimes some user use the search engine, but it is not always the case). As forum threads As a wiki page has a much longer lifetime than a forum thread, it is a good practice to increase the value of the information accumulated in a forum thread by condensing it into a wiki page. Its value is further growing over time because – in contrast to information in a forum thread - it is much more likely that the information in the wiki is kept up to date. When a Forum Topic is summarized into a wiki page or pages, it is a good practice to let the forum readers know about it. (This helps people that find an old forum thread via search engines). The above recommendation does not apply to all forum threads, but often it’s already clear from the first question in a new thread if the asked for information would be a valuable addition to the wiki. To make the process more efficient we like to suggest the following approach. Once it’s clear that the question is of a conceptual nature and it will take some time to compile a good answer consider to first create the answer as a how-to entry or a concept entry in the wiki. Then answer the forum’s question by adding a link to the newly created wiki page.

Sometime there is a very good discussion in the forum (example, how to, architecture description, advanced topic explanations). Such valuable know how belongs to the wiki, but it is sometimes not possible to control where the discussion takes place. If there is/are (roughly) matching existing wiki pages but the person responding the forum thread does not have the necessary time to amend this existing wiki at least add a link from the wiki page to the forum thread.

A wiki is not a book, it is not linear. It is not possible to assume where a reader will start reading (he might land on a page with a search engine). Therefore it is important to link the pages together. We try to add a “see also” section on each page. It is the default solution to link pages with each other.

It is possible to check how many other wiki pages contain a link to a page. Link “What links here” from the Toolbox section. At list 2-3 pages should reference a new page.

Nominations for committer status can be created in the committer portal. Nominations should follow the according to the Eclipse wiki guidelines. A good starting point for nominations is a significant number (8-15) of well written patches, meaningful posts on the Scout forum and other community activities. To count patches we typically use the Scout IP Log.