Difference between revisions of "Scout/Concepts"

Scout is the base of applications that may be developed with or without the Scout SDK. As Scout is written in pure Java/J2EE and satisfies the OSGi paradigm, integration of 3rd party libraries or applications is fully supported. The Scout runtime both provides a large amount of reusable functionality and a library of abstract UI component models. 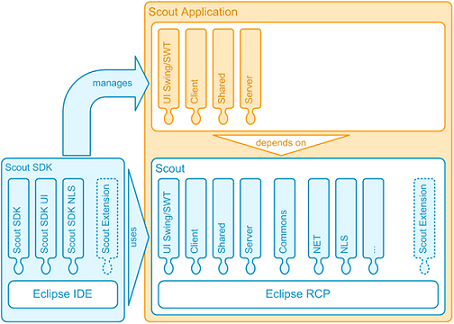 Scout SDK is an Eclipse plugin set that boosts developer productivity in building complete applications. Examples of such applications are:

Scout SDK operates on top of both the Eclipse JDT/PDE model. Scout SDK guides the developer in building Scout based SOA compliant applications. Instead of implementing the same patterns of an application again and again, Scout SDK helps to reduce development time by offering tooling and outline views to navigate the application. As a consequence, developers can focus their work on the business logic of the application. In the background Scout SDK takes care of the sound architecture and complete structure of the Java project. The result of a solution developed with Scout SDK is a pure Java solution consisting of one or more Equinox/Eclipse based applications.