Difference between revisions of "Riena/RAP Support"

Set up target platform for Riena on RAP apps 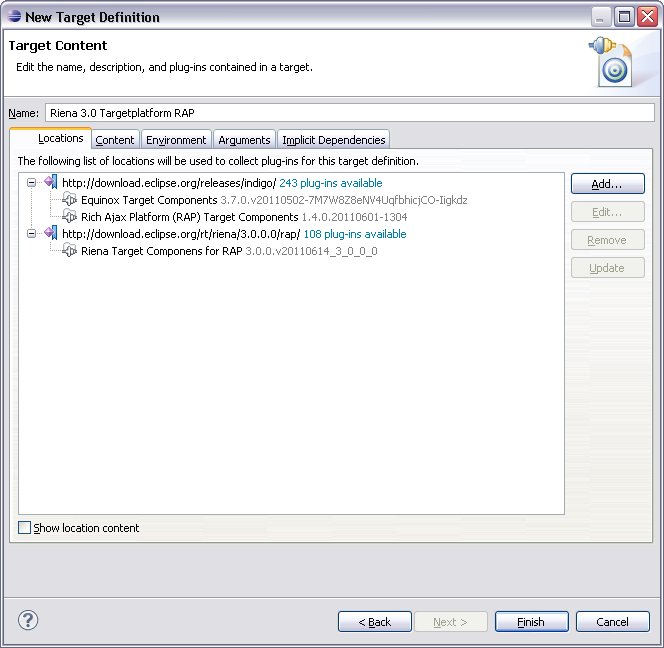 Now you are ready to start writing Riena applications (ensure that in such a launch configuration the bundle org.eclipse.riena.ui.swt.rap is selected as required bundle). To get a feeling of the Riena framework, take a look at Riena's Example Applications and Code Templates. Make sure that you click on "Add Required bundles" before you start any of the examples that come with Riena.

This page is a whiteboard with information about running Riena on RAP and known issues.

Getting Started with the Source Code

This is ongoing work. Expect more issues to be added.

While porting Riena to RAP we encounter several issues (some say challenges). Most (or probably all) of these issues are well known and RAP has already solutions for them - see FAQs.

The goals for the port are:

The following sections describe concrete problems and patterns how to solve them.

Although RAP handles a lot of SWT's funtionality for the web, there is functionality that it does not (yet) handle. For these cases Elias introduced the facade factory pattern. (The following description is picked from a mail to riena-dev)

The facade factory only works because of some careful bundle/classpath engineering. It is crafted for one particular use, i.e picking between RAP/RCP.

Here are the prerequisites:

There are two kinds of singletons within Riena

To solve the singleton problem within RAP it provides the (abstract) SessionSingletonBase class that is able to create session-dependent singletons. This class may be used directly by calling it's (static) getInstance(Class type) method or by sub-classing and providing a taylored (static) getInstance() method. With this it is very easy to transform the first singleton type and a little bit more work to transform the second type - both without breaking the current interface of course.

The straightforward technique of just passing a class to the getInstance() method is for most cases sufficent. However, it does not allow to:

Of course, it possible to create workarounds:

The introduction of e.g. an IInstanceFactory interface with a single getInstance() method could solve this. The class implementing the IInstanceFactory could then internally be used for creating the key to store the singleton in the session store. And the usage of generics would be a nice bonus.

A OSGi Service is also some kind of singleton, i.e. it exists only once in a JVM. How to deal with services that have (session dependent) state?

This is just a reminder! Are ThreadLocals safe?

This is just a reminder! This utility tells whether it is running on a client or a server. This allows to implement common code that behaves differently on client or server. We have to think about that!