If the user is playing the role of participant, the identifier of the person entity in the participant context is "<contextid>#me" by convention (see the Naming Conventions section below for more details). The id of the person entity in the definer context is a globally unique identifier of the form "<contextid>#localentityid" where localentityid is usually a URI-friendly normalization of the user's username on the external system. The storage for a definer context may be managed by the "other" party (e.g. the business, or the friend's PDS operator) or it may be located within the user's ADS. The latter case is when the other party doesn't support interoperable protocols for this kind of data exchange, and instead the user's PDS implements a facade that emulates this capability (e.g. by HTML scraping/filling a website periodically). 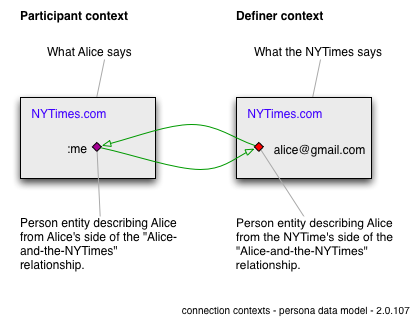 Both the definer and the participant contexts contain p:Person entities with a set of attributes. These two attribute sets are not necessarily disjoint (i.e. there may be 0..N attributes that are common to both p:Persons).

We discuss how attributes are integrated from each side using an example of Alice's connection to the SONY website. The parameters of this connection were defined by SONY, specifically, by a SONY-minted ConnectionTemplate. We now consider this relationship from each side.