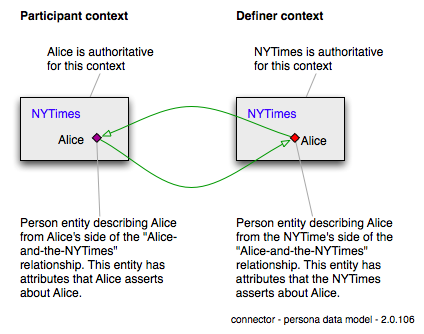 Both the definer and the participant contexts contain a single p:Person entity with a set of attributes. These two attribute sets are not necessarily disjoint (i.e. there may be 0..N attributes that are common to both p:Persons). We consider two integration cases. Let's assume that Alice has created a connection to the SONY site. The parameters of this connection were defined by SONY, specifically, by a SONY-minted ConnectorTemplate. We now consider this relationship from each side.