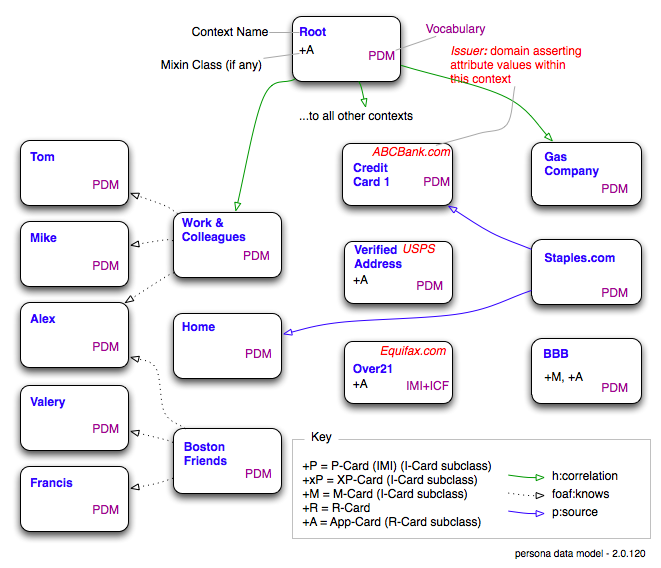 In the Higgins PDS, all data is stored as Statements. Each Statement consists of a Subject, Predicate, and Object. Each Statement is stored in a Content (AKA Graph). Contexts, Subjects, Predicates, and many Objects (some Objects are literal values) are specified by URIs. A URI which represents a Subject in one Statement may represent a Context, Predicate, or Object in another Statement. Statements pertaining to the same Subject or Object may be contained in different Contexts. A Store contains a set of Contexts. The Higgins PDS attempts to handle scenarios involving multiple Stores.

Many applications will want to access all of the Statements related to a specific:

When all of the Contexts are contained in the same Store, these queries are relatively trivial. However, much complexity is involved when they are contained in multiple, potentially discoverable, Stores. When Contexts are created, a decision must be made regarding which Store will comtain them and how they will be named. When Statements are created, a decision must be made regarding which Context will contain them. When new Subjects and Objects are created, they must be named in a way that allows them to be unique and allows the discovery of which Context (and Stores) contain Statements pertaining to them. In the Higgins PDS, Users may establish relationships with different Store providers, and may decide to migrate from one provider to another. Therefore, the identifier used for Contexts, Subjects, and Objects should not lock them into a specific Store.

Linked Data URIs and Universal Data Identifiers (UDI)s are technologies designed to help solve many of these problems. However, these alternatives both seem limited in a way that assumes that all Statements related to that Subject or Object are contained in the same Context (in the same Store).

There seems be be a need for a service that allows the registration, modification, and resolution of these identifiers in a way that allows an appropriate authority to maintain control over how they resolve. Many problems must be solved to make this work, including:

Due to the above issues, for the near term, the Higgins Project will progress with the following simplifying assumption:

There are a few Contexts that contain definitions of classes and other statements that are required in order for the system to function (e.g. those that define the Persona Data Model). These Contexts are usually defined in OWL/RDF files that are accessible at their Base URI. The statements in these files will be loaded into Contexts named with the Base URI:

Universal Contexts are also accessible as Linked Data under an alternate name relative to the PDS.

For every User with an account, there is exactly one Root Context.

URIs will be relative to the authoritative Context URI.

The Root Person in each User's Root Context has a relative name of Person_0.