As we've described above, 'regular contexts contain a person entity with an associated set of logically related attributes. These contexts are physically located with the PDS (the attribute data service to be precise), and hold attributes/values that the PDS owner/user can edit and update as they see fit. In other words the owner/user is authoritative over the values of these attributes.

We describe these bi-directional data sharing relationships using two inter-linked contexts, we refer to one as me and the other as other. Let's take the example of a relationship with the New York Times. We represent this relationship using a me/other context pair: 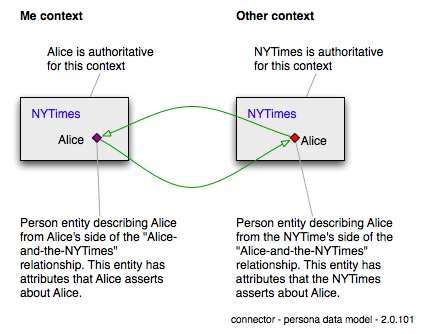