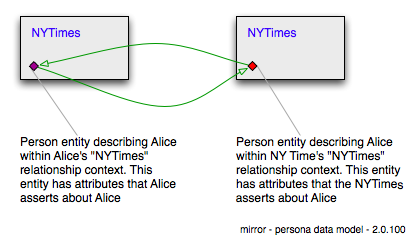 In the previous example the NYTimes is authoritative for the context on the right and the user is authoritative for the context on the left. In this example the NYTimes is clearly an autonomous entity making its own statements about Alice. Ideally the NYTimes would run a Higgins (or compatible) PDS and directly manage the data storage for, and the network interfaces to the context on the right. Of course in most cases a Higgins-compatible endpoint exposing the right-hand context doesn't exist. To handle these more common cases, we still model the relationship using the two contexts, but we add a data connector process that "speaks" to the external service using whatever native protocols and methods are possible. The data connector reads and writes data into the right-hand context. These connectors could run either in the Higgins browser extension (in JavaScript) or on the Higgins PDS server (in Java). 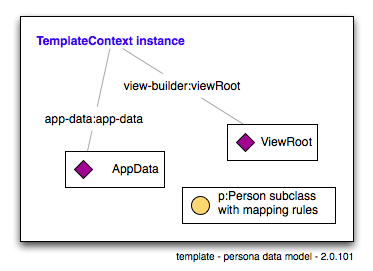