Difference between revisions of "PDE/User Guide"

Discover the latest features in the What's New section.

Some of the PDE tools include:

To get started, try out the following cheat sheets:

PDE API Tooling assists in the documentation and maintenance of APIs provided by plug-ins and OSGi bundles.

Some of the features include:

To get started, see the tasks:

PDE Build facilitates the automation of plug-in build processes. PDE Build produces Ant scripts based on development-time information provided by, for example, the plugin.xml and build.properties files. The generated Ant scripts, can fetch the relevant projects from a CVS repository, build jars, Javadoc, source zips, put everything together in a format ready to ship and send it out to a remote location (e.g., a local network or a downloads server).

To get started, see the following:

A basic rule for building modular software systems is to avoid tight coupling between components. If components are tightly integrated, it becomes difficult to assemble the pieces into different configurations or to replace a component with a different implementation without causing a ripple of changes across the system.

When a plug-in wants to allow other plug-ins to extend or customize portions of its functionality, it will declare an extension point. The extension point declares a contract, typically a combination of XML markup and Java interfaces, that extensions must conform to. Plug-ins that want to connect to that extension point must implement that contract in their extension. The key attribute is that the plug-in being extended knows nothing about the plug-in that is connecting to it beyond the scope of that extension point contract. This allows plug-ins built by different individuals or companies to interact seamlessly, even without their knowing much about one another.

Yet another category of extension points is used to group related elements in the user interface. For example, extension points for providing views, editors, and wizards to the UI allow the base UI plug-in to group common features, such as putting all import wizards into a single dialog, and to define a consistent way of presenting UI contributions from a wide variety of other plug-ins.

A feature is used to package a group of plug-ins together into a single installable and updtable unit.

Features have a manifest that provides basic information about the feature and its content. Content may include plug-ins, fragments and any other files that are important for the feature. A feature can also include other features. The delivery format for a feature is a JAR, but each included plug-in will be provided as a separate JAR.

Once you have created your plug-ins and fragments you can create a new feature by creating a New Feature Project.

You can also create Feature Patches in PDE. A feature patch is developed in the same fashion as a normal feature, but is used to edit an existing feature rather than create a new one.

A fragment is used to replace or extend the functionality of an existing plug-in. A common use for fragments is to put environment (operating system, architecture, etc.) specific code into fragments. Depending on the environment the plug-in is installed in the base plug-in code along with the correct fragment can be installed. Fragments are also ideal for shipping features like language or maintenance packs that typically trail the initial products for a few months.

When a fragment is detected by the platform and its parent plug-in is found, the fragment's libraries, extensions and extension points are "merged" with those of the parent plug-in.

While this merging mechanism is good from a runtime point of view, developers need to view fragments as separate entities while working on them.

PDE provides full support for fragment development. Fragments can be viewed as "limited plug-ins". They have all of the capability of regular plug-ins but have no concept of life-cycle. Fragments have no top-level class with "startup" and "shutdown" methods.

To create a fragment use the New Fragment Project wizard. Editing fragments is very similar to editing plug-ins.

A plug-in is used to group your code into a modular, extendable and sharable unit.

Plug-ins are modular as each plug-in contains some portion of code. The plug-in specifies other plug-ins (or java packages) it requires to be available to run and it also specifies the set of java packages it provides. An Eclipse based program or product will contain multiple plug-ins, which can be added, replaced or removed to alter the functionality of the program.

Plug-ins are sharable. A plug-in can be exported as a directory or as a jar which can be added to other applications. Plug-ins can be grouped into features which can be distributed and installed into applications.

Eclipse plug-ins are based on OSGi bundles. OSGi is used to manage the plug-ins in an Eclipse application. A plug-in must contain a manifest file with valid OSGi headers for plug-in name and version. Extensions and extension points functionality added by Eclipse in addition to OSGi. To use extensions you must provide a plugin.xml file. PDE provides a full featured project and editor for creating and editing these files.

An Eclipse based product is a stand-alone program built with the Eclipse platform. A product may optionally be packaged and delivered as one or more features, which are simply groupings of plug-ins that are managed as a single entity by the Eclipse update mechanisms.

Products include all the code and plug-ins needed to run them. This includes a Java runtime environment (JRE) and the Eclipse platform code. The plug-in code, JRE, and Eclipse platform are typically installed with a product-specific installation program. Product providers are free to use any installation tool or program that is appropriate for their needs.

Once installed, the user launches the product and is presented with an Eclipse workbench configured specifically for the purpose supported by the product, such as web development, C++ program development, or any other purpose. The platform makes it easy to configure labels, about dialogs, graphics, and splash screens, so that the user has no concept of a platform workbench, but instead views the workbench as the main window of the product itself.

PDE provides a product configuration file and associated editor to make it easy to create products in the correct format.

The Target Platform refers to the plug-ins which your workspace will be built and run against. It describes the platform that you are developing for. When developing with PDE, the target platform is used to:

By default PDE provides a default target platform which simply points to the plug-ins in your currently running Eclipse instance (often referred to as your host). For Eclipse plug-in developers this might be all you need. RCP developers must be more careful managing their target as adding dependencies increases the size and complexity of their application. When creating a new target definition for RCP, consider using the RCP template (available with or without source).

For up to the minute target troubleshooting help see the Target Definitions Wiki Page.

Update Sites are used to organize and export features so they can be installed into Eclipse applications.

To create an update site you must develop a site.xml file and build the site. PDE provides an editor and project for creating sites. A site will contain one or more features organized into categories.

When the site is built, the included features (along with all plug-ins part of those features) will be exported into an installable form. The exported plug-ins and features will be put into two folders "plugins" and "features". Two other files, "content.xml" and "artifacts.xml" will also be generated and contain metadata for the exported files that make installing easier. These files, along with "site.xml", collectively form an Eclipse update site. To make the update site available to others you must make all these files available in a shared directory or web site.

Automated building an RCP application from a product definition file

PDE Build comes with infrastructure to build a complete RCP application from a product configuration file. Most of the setup necessary for such a build can be done through a few modifications to the template build.properties provided in PDE build. The following section focuses on setting up a simple product build assuming that all plug-ins and features (both to build and pre-built) referenced by the product file are already locally available on disk.

The first step in setting up a build is to create the directory in which the build will take place. This directory will be referred to as the build directory and will contain the plug-ins and features to build as well as all the generated artifacts. Next, copy your plug-ins and features respectively into "plugins" and "features" subdirectories. Your product configuration file is expected to be in one of these plugins/features.

Overview of the directory structure

To run the build you will use the org.elipse.ant.core.antRunner application. When invoking eclipse with this application to perform a build you need to set two arguments on the command line:

Behind the scenes this setup will generate a feature containing the plugins or features specified in your product configuration file. This generated feature is then used to drive a normal feature based headless build. If you require more customization of the build, ie fetching from a repository, see the Advanced PDE Build topics for more information.

This section explains how to enable your existing plug-ins for API analysis.

Select the project you want to convert.

This section explains how to enable a new plug-ins for API analysis.

Setting up a baseline

Once your plug-in is converted to use API tooling, you need to set up a baseline in order to get the compatibility analysis performed for your plug-in.

To create an API baseline do the following:

Filters can be used to remove known or expected API problems that cannot be readily corrected. Problem filters can be created easily using the Create API Problem Filter quickfix.

Using the quickfix let's see how we can add a new filter.

Once the problem filter has been created the corresponding resource is rebuilt and the problem is removed from the Problems view and any open editors.

If you want to remove an existing API filter, do the following steps: 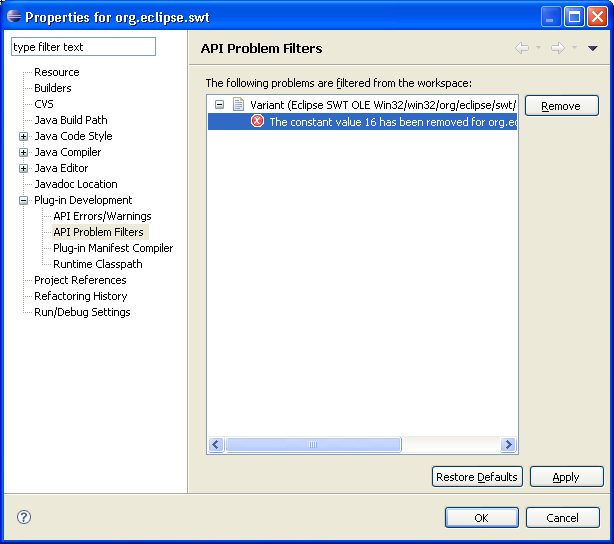 The options can be changed per project or per workspace.

Comparing to an API Baseline

NOTE: all selections must be made from the Package Explorer because the compare wizard works only for Java elements.

To compare to an API baseline do the following:

Export and Install into the Running Host

PDE provides several tools for launching plug-ins and features in your workspace. The Eclipse Application Launcher can be used to create a second running instance of Eclipse that runs the code you have in your workspace. This is commonly referred to as self-hosting. Self-hosting is a powerful debugging and testing tool. However it is sometimes necessary for code to be tested in your host, your currently running Eclipse instance. To test code in the host, you need to export and install into the running Eclipse instance.

To export plug-ins and features and install them into the host Eclipse do the following:

Your plug-ins will be installed and running after the restart. You can see what has been installed using the Installation Details button on the About Dialog (available by going to Help > About Eclipse SDK)