Difference between revisions of "PDE/Resources/Execution Environments"

Execution Environments (EE) are a neat concept within OSGi, however, things can become complicated when developing against multiple EEs. When you want to contribute code to Eclipse, chances are that you will be asked to downgrade your code to the lowest possible execution environment.

For example, suppose that you want to contribute a Twitter client to Eclipse, or any other open source platform. If you are already accustomed to the OSGi way of working you would probably want to split your code into several independent bundles (AKA modules or plug-ins). At least you would provide a module named org.eclipse.twitter.core and one called org.eclipse.twitter.ui. To be really useful, it would be the bomb if the core bundle could run on, say, a watch. For watches, and other minimal devices there is a special Java environment which is a subset of Java 1.4 (without regular expressions unfortunately) called Foundation 1.1 or CDC 1.1/Foundation 1.1. There is also a Foundation 1.0 but this is really stone age and hardly not used. From what I know, Eclipse uses the 1.1 as a minimum level.

Your org.eclipse.twitter.ui package would normally not require such a primitive environment, however, if somebody wanted to implement a twitter client on a watch, he or she could at least use your core to handle the difficult stuff. 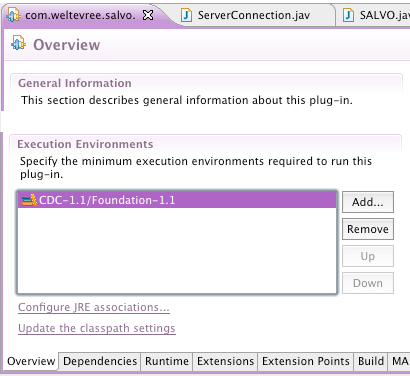 For example, a Java 5 JRE can provide the "split()" method for String but this method is not available in Foundation 1.1. Even if your execution environment was set to CDC 1.1/Foundation 1.1 in your manifest file, this problem would only be detected when it was executed against a Foundation 1.1 JRE.

However, we want Eclipse to guard this and warn us when we try to use illegal (future) methods or classes. In order to set this up, we first have to get the available execution environments from the Eclipse update site. In order to do this, go to the preferences and type 'API' in the search box. Then select the "API Errors/Warnings" page. If you open the first section and select "Error" for the "Invalid references ..." field, the "Supported Environments" box will be accessible and we can click on the provided link.