You will find a version of this plug-in in the SVN repository.

You could download it or use the update manager. See more ...

Because MoDisco Workflow has a driver mechanism to manage external components, each driver has a dependency to one handled component. To install a dedicated driver properly, the handled component shall have been installed. It is a reason why when you click on the "Install..." button, you can have dependency errors. In that case, you could install the missing packages at the origin of the errors or deselect the dedicated driver. Then restart the installation process. 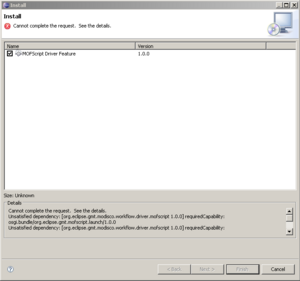 If you didn't have dependency errors, click on the "Finish" button. The installation of the MoDiscoWorkflow plug-in and its selected drivers is finished. Congratulations!

The user interface of MoDiscoWorkflow

To reach the MoDiscoWorkflow plug-in user interface, you have to click on this button 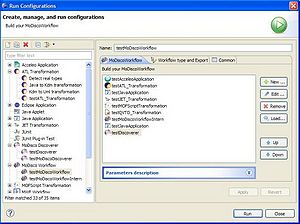 You can now build your MoDiscoWorkflow. Various properties are proposed to you: 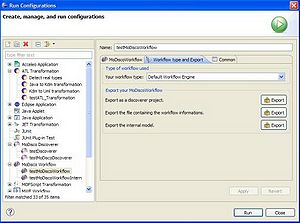 During an export of current workflow definition as a discoverer project, a plug-in project has been created in eclipse workspace and populated using available informations. It reproduces the behaviour of current workflow definition with discoverer capabilities (contextual menu, specific launch configuration, etc.). However, user still have to modify the plug-in project to be able to use generic parameters and not those statically defined in workflow. A complete example will come soon. 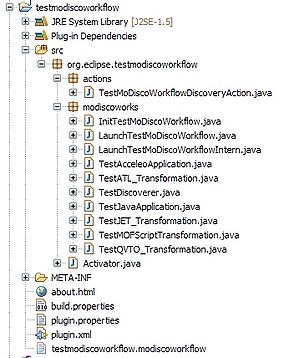 An overview of plug-in project created from workflow informations.

As other launch configurations, users are able to save these configuration as an external file, or configure usage ... 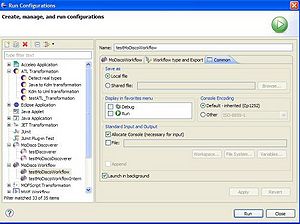 After having clicked on the "New..." button, you must choose the type of workflow item you want to add. According to the installed drivers, you have more or less choice. 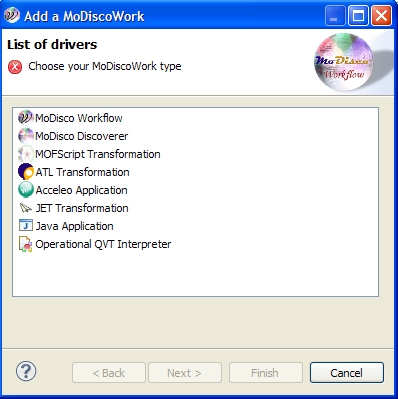 Choice of type for the workflow item

To edit a MoDiscoWork, click on the “Edit…” button after selecting the desired MoDiscoWork. A new wizard opens to configure the selected MoDiscoWork as you do usually in main dialog of launch configuration.

To remove a MoDiscoWork, you must select a MoDiscoWork in the MoDiscoWorkflow and click on the "Delete" button. A new window opens proposing these various choices: 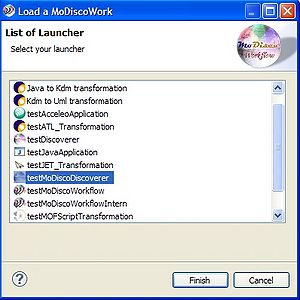 Load a MoDiscoWork item from list of existing launch configurations

When you want to load a launcher (which is also a MoDisco workflow item) in the MoDiscoWorkflow, click on the "Load…" button. A new window opens proposing every launcher present in the launch configuration dialog which has a driver defined for the type of launcher. To add it in the workflow, select a launcher and click on the “Finish” button.

Add a driver in MoDiscoWorkflow for a type of launch configuration

In this example, we are creating a new driver for launcher of papyrus. Follow these steps:

The "com.cea.papyrus.extensionpoints.transformation.launchConfigurationType" string is the papyrus launcher type. The launcher type is present in the ".launch" file. This file is created during the creation of a new launcher of this type

It is necessary to use the delegate to execute the configuration.

Add a workflow engine in MoDiscoWorkflow

To extend capability of MoDiscoWorkflow, users are able to provide other workflow engines through extension point mechanism. 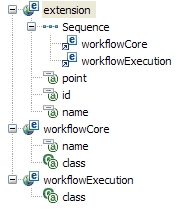 Right now, it's not possible to bind the parameters between components. Furthermore, the workflow is executed in a sequential way.