Difference between revisions of "MoDisco/Components/KDMSourceExtension/Documentation/0.9"

The KDM inventory model also proposes SourceRegion/SourceRef concepts for weaving other kdm models (kdm code models, ...) with a physical representation. Some references exist from other KDM subpackages to the SourceRef concept.

A subpart of the KDM Source model is extended for linking the SourceRegion concept with non-KDM elements, via the ASTNodeSourceRegion metaclass.

Moreover a recurrent pattern, in such a model composition, is to link a KDM SourceFile with a code model element. Such a link is represented with the CodeUnit2File metaclass. 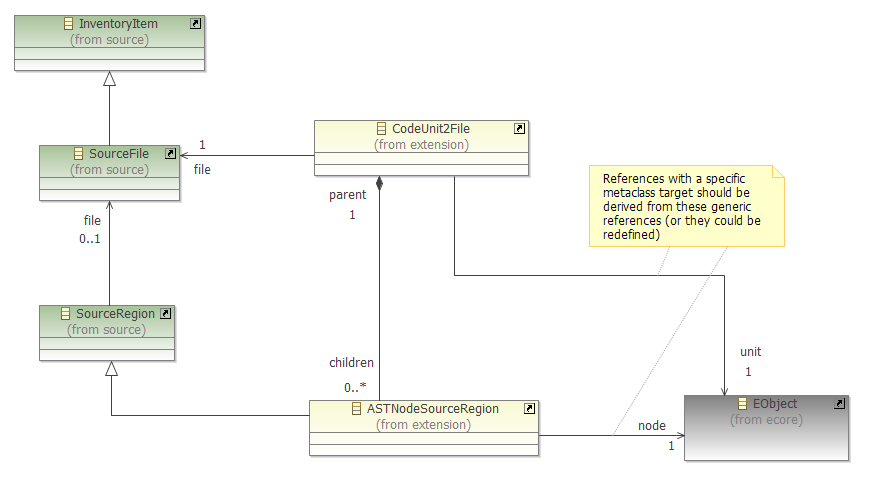 This is a core metamodel that the developer should extend for describing a composition between a specific code metamodel and kdm.source.

Given a particular code metamodel (such as the Java one), MoDisco proposes to extend KDMSourceExtension to define a metamodel composition between inventory models and code models.

(TODO : an opposite reference should be described for allowing navigation from code elements to the SourceRegion instances --> waiting for facet shortcut evolution to come)

A discoverer for the related code model is a prerequisite. The Java Discoverer is an example. Such a discoverer is not supposed to instantiate SourceRegions subclasses. To avoid ambiguity, we will talk about it as a "leaf code discoverer".

A kdm.source model can be discovered using the KDM Source discoverer. Note that such a discoverer only provides a representation of files/directories. It does not instantiate SourceRegions subclasses.

A reference example of such a composition dicoverer is the Java Application discoverer example (Java class DiscoverKDMSourceAndJavaModel).

An abstract java class is proposed to facilitate and factorize some common code: AbstractComposedKDMSourceDiscoverer.
This abstract discoverer proposes a process with four steps:

Using the AbstractComposedKDMSourceDiscoverer is not mandatory.

In most cases, code discoverers have access to the physical localization for each portion of code that is modeled.

There are two ways for a composite discoverer to retrieve such information when invoking the leaf discoverer :

AbstractRegionDiscoverer.notifyRegionSourceVisit must be called when appropriate from inside the leaf discoverer.

The Java discoverer implementation class illustrates the application of such a pattern.

Once the composite discoverer has the capability to retrieve information about source regions visited and associated code model elements, it will instantiate the SourceRegion.

Creating one SourceRegion instance for each code model element may induce some memory usage issues. Considering a given code metamodel, it may be interesting to have a strategy for dispatching model elements (from the composition model) into more than one XMI resource file.

Thus, the EMF lazy resource loading mechanism enables opening and working with some subpart of the model.

A reference implementation for this strategy is in the Java Application discoverer.

This component proposes a small framework for synchronizing model element with their source code. The idea is to be able to browse a model of any technology, and to have the possibility to directly navigate to its source code in the right editor.

An example of what the result looks like has been implemented for Java. For more information on how to use it see the Java source code synchronization user manual

Result of a code synchronization

This extension point aims at declaring strategies to open the file which contains the element, and then to select it in its editor.

This class only maps the event "doubleClick" in the browser in order to call the openAndSelectEObjectInSourceFile method without adding a dependency between the MoDisco Browser and kdm.source.extension.ui

This class extends AdapterImpl to provide a convenient way to manage strategies (Source/Revealing) for a given element. A SourceAccessAdapter is added to each element which has to be synchronized with its source code. Thanks to this adapter, strategies are resolved once for an element and then stored in the adapter.

This class extends AdapterFactoryImpl to provide the Adapter mechanism implemented to manage extensions.

Available strategies extensions are stored in a singleton way in 2 static lists:

Then each time we need a strategy we use the singleton pattern to get it.