Difference between revisions of "MoDisco/Components/FacetManager/Documentation/0.8"

How to create a model facet set

The first step is to create a MoDisco project.

The second step is to create a query set. This query set will store boolean queries indicating if an object conforms to a facet.

Right-click on the MoDisco project and select the "New > Other ..." button.

Select "Facet Model" and press the "Next" button

Choose a name for your model facet set (My.facetSet in the example) and press "Next".

Select "FacetSet" in the "Model Object" list and press "Finish"

Open the "My.facetSet" file and open the "Properties View"

Set the name of the facet set and make sure that the facet set name is the same as the containing file name ("My" in the example). The nsURI and prefix must also be filled.

In this example, we choose to use the Java meta-model.

Fill the "Extended package" field with the ePackages containing the virtually extended meta-model.

Right click on the FacetSet element and choose the "New Child > Facet" action to create a facet.

To specify how to know if an object conforms to a facet, we have to provide a boolean query. To provide this query we have to load the model containing its description.

The query has to be referred to using the MoDisco protocol: "modisco:/query/<querySetName>". In the example, we use the "My" query set.

Once the query set resource is referenced, we just have to select the query describing the facet. In the example this query is named "isAbstract".

At this step, if we save the model, the "red cross" should disappear from the file icon. This means that the facet set model is now valid.

If the facet has specific attributes or references which can be calculated, we can declare them. In this example, we will declare an attribute indicating the number of abstract methods contained in the abstract class. To create a new facet attribute right-click on the facet element and select the "New Child > FacetAttribute" item.

The attribute's type and name must be set. The "Value Query" field must be filled with a reference to a query which is used to calculate the attribute's value. This query must have the same type as the attribute and be applicable to the virtually extended class.

The facet set is now ready to be used.

How to consult the MoDisco facet set catalog through the UI

To open this view select "Windows > Show view > Other ..." in the menu bar and choose "Facet Set" in the list.

The "Facet set" view presents the available facet sets and their facets. For each facet set the location of its description model is pointed out.

How to programmatically use the MoDisco facet set catalog

Here is an example of using the MoDisco facet API. For more information please refer to the JavaDoc. 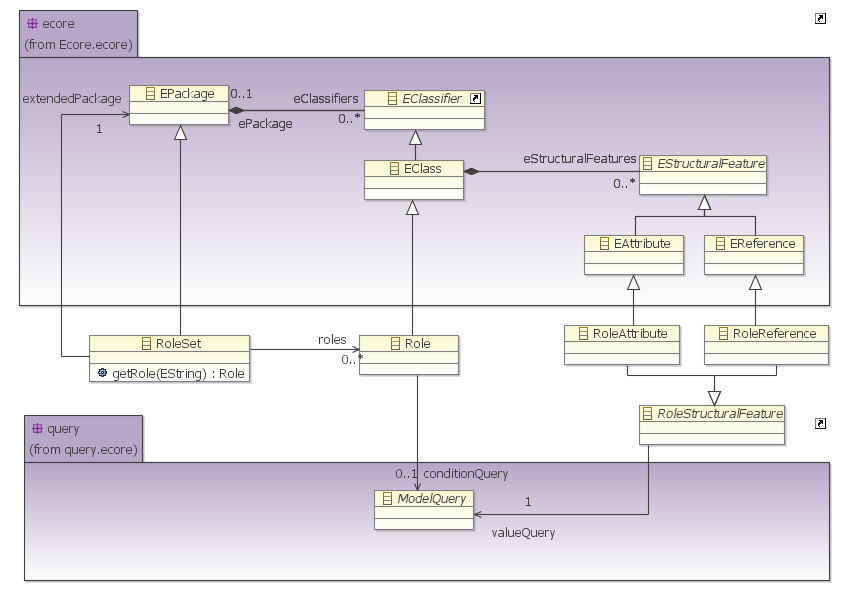 For a facet instance, the eSuperType reference must be set to specify which class the facet virtually extends.