Difference between revisions of "Jetty/Reference/Dependencies"

The Jetty classes are organized into almost fifty JARs, so it is crucial to understand the organization and dependencies (internal or external) when creating classpaths for Jetty.

When working out dependencies, the Maven dependency:tree plugin is your friend. For example, to find out the dependencies of the jetty-servlet module:

compile
Real, hard dependencies that you need to compile and run the code. In the example above, you can see that jetty-servlet has a single hard dependency on jetty-security, which has transitive dependencies on jetty-server, servlet-api, jetty-continuation, jetty-http, jetty-io, jetty-util.
provided
(Optional) Used for optional dependencies needed to compile the code, but are not necessary at runtime. For example jetty-util provide-depends on org.slf4j:slf4j-api so that it can compile the Slf4jLog. However, slf4j is optional at runtime, so that if the dependency is not on the classpath, then the Slf4J logger is not used.
(Environmental) Also used for dependencies that are expected to be present in a runtime environment. For example the test-jetty-webapp provide-depends on the servlet-api so that it can be compiled against the API, but the servlet container is expected to provide the servlet API, so the servlet-api JAR is not included in the WEB-INF/lib of the assembled WAR file.
test
Used for unit tests (note that some integration tests are in modules with test-foo names, and use normal compile dependencies to access common test resources). 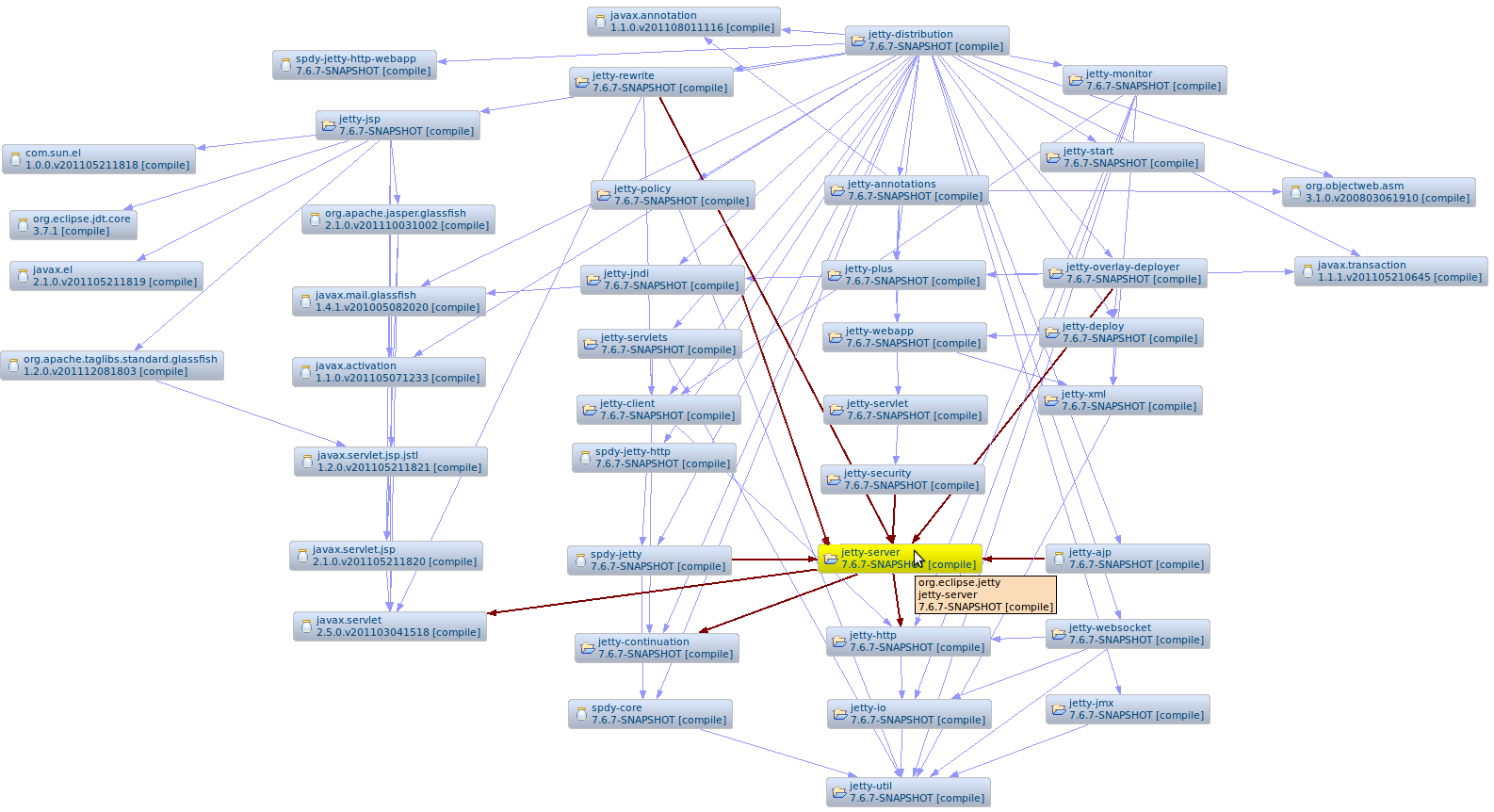 The jetty-util, jetty-io and jetty-http jars form the core of the jetty HTTP handler (generation and parsing) that is used for both the jetty-client and the jetty-server

Together with the HTTP jars, the jetty-server, jetty-continuation and server-api jars make up the minimal dependencies needed to run a HTTP server. Note that while the servlet-api is used for requests and responses, this is not a servlet server and Jetty handlers must be used to generate responses.

If the jetty-security and jetty-servlet modules are added to the server dependencies, then you have the capability to run standard Servlets and Filters, but these must be configured programmatically. If the jetty-xml and jetty-webapp modules are included, then standard web applications and WAR files may be run using web.xml configuration. The jetty-deploy module then adds the ability to discover and deploy WAR files in application server style.

Jetty does have some run-time optional dependencies. For example, the log mechanism contained in the jetty-util jar looks for an SLF4J jar on the classpath. If it finds one, SLF4J is used for Jetty logging; otherwise a simple stderr logger is used.

The start.jar is a generic and portable way to assemble a classpath and run a Java program. The default start.config file baked into the start.jar is for Jetty, but it could be modified for any application.

The start.jar mechanism uses the options defined in the config file to define the JARs required to run. The default configuration, which supports the core Jetty server with web applications, but no JSPs, is run with:

If the core server jars are needed plus JSP and JMX, then specify these options, for example:

You can view the available start parameters and options with:

You can see details of the jars each OPTION provides here or listed with:

In addition to OPTIONS, the default configuration start.jar allows the classpath to be expanded by setting options for "lib" (to a directory containing jars) or "path" to a specific classpath. For example:

produces the following command line on the stdout:

When embedding Jetty in other applications, it might be inconvenient and/or verbose to include the many small Jars that comprise Jetty. Thus there are several aggregate Jars available, which combine many smaller Jars into a single Jar.

Aggregate Jars are available as a Maven artifact under the org.eclipse.jetty.aggregate group ID.

The aggregate Jars available are:

This page was last modified 14:38, 23 April 2013 by Jesse McConnell. Based on work by Jan Bartel, Abdull and Shirley Boulay and others.