Difference between revisions of "JFaceSnippets"

JFace-Snippets are small and easy understandable programming examples how to use the JFace API. To browse the examples, navigate to the examples GIT repository.

The header section of each snippet is a link to the plain source. You can copy the source and paste it directly on the source folder or package in an eclipse project. The package and the class will be created automatically.

Demonstrates usage of Icons in Buttons of Dialogs

Drop these icons also in the same package

Demonstrates usage of the GridLayoutFactory to make more readable 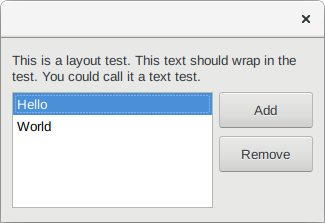 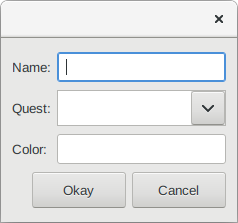 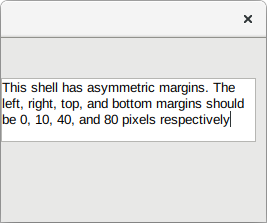 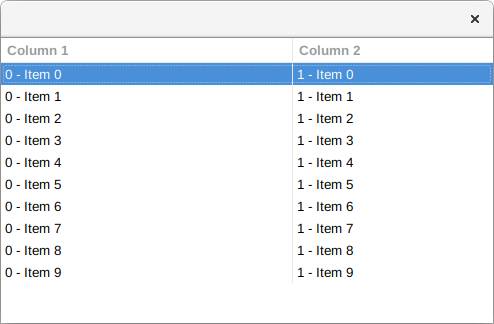 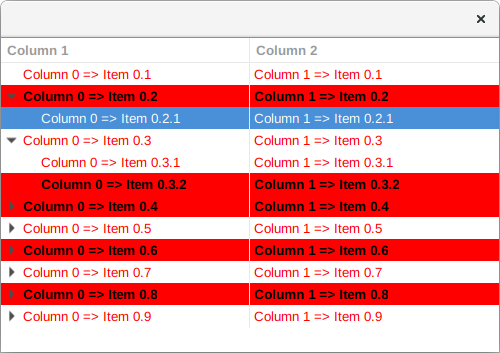 Demonstrates a simply TableViewer with one column. It holds all important classes used for all Table-like JFace-Viewers (LabelProvider,IStructuredContentProvider) 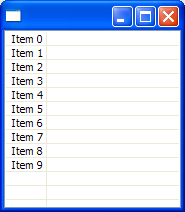 Demonstrates a simply TreeViewer with one column. It describes all important classes used for all Tree-like JFace-Viewers (LabelProvider,ITreeContentProvider) 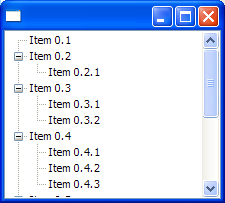 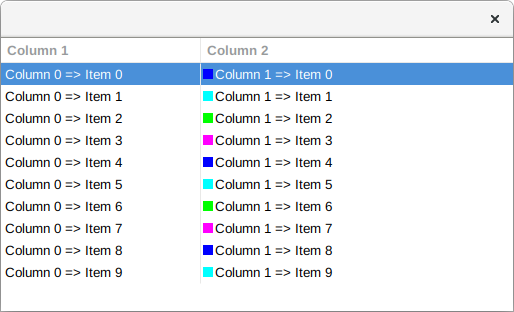 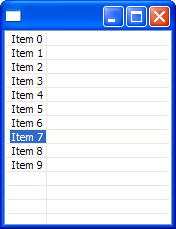 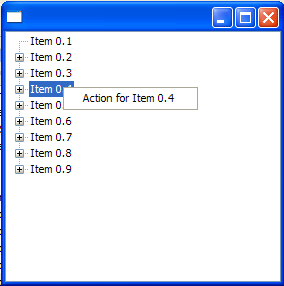 Demonstrates first use case for the new OwnerDraw-Support added to JFace in 3.3 (available at SWT-Level since 3.2). This example uses the new Viewers API in this special case the OwnerDrawLabelProvider to make items with more than one line of text. 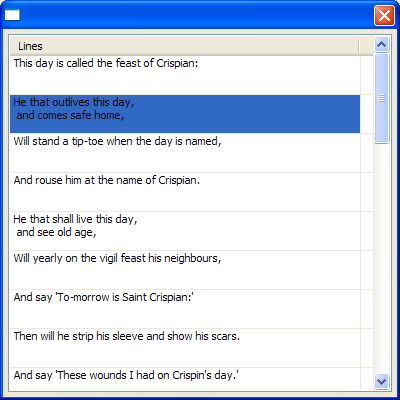 Demonstrates how you can use a use inline editing in tables with multiple columns which requires to use SWT.FULL_SELECTION but hiding the selection from the user. 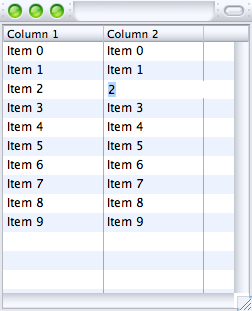 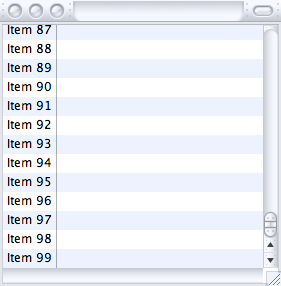 Demonstrates minimal example when trying to add inline editing to tables to get familiar with the various classes needed (3.2 API) 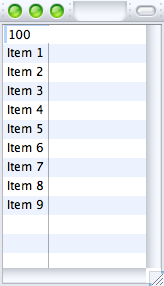 Demonstrates usage of new OwnerDraw-Support feature provided by JFace in 3.3(available in SWT since 3.2). This example uses the new Viewers API in this special case the OwnerDrawLabelProvider. 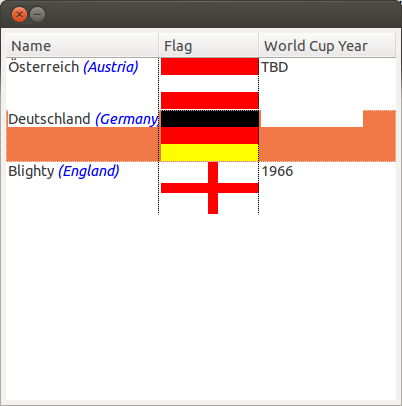 Demonstrates usage of new custom tooltip support in 3.3 used to provide a tooltip for each cell in TableViewer 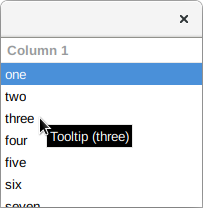 Demonstrates usage of none mandatory LabelProviders in TableViewers to set colors and fonts with 3.2-API 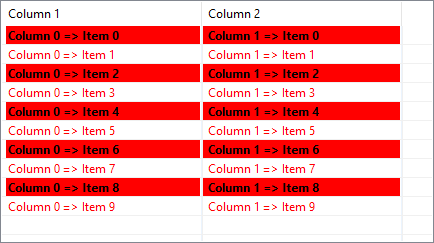 Demonstrates usage of none mandatory LabelProviders in TreeViewers to set colors and font with 3.2-API 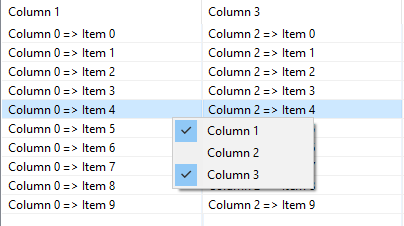 Demonstrates adding/removing of columns in conjunction with inline editing which makes this a bit tougher than without it (using 3.2 API)

Demonstrates the base classes of 3.3 API

Demonstrates how one can use the new 3.3 API to add tab-editing support to your viewer 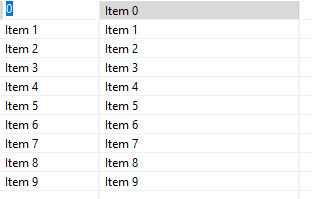 Press Tab to jump from cell to cell

Demonstrates all fancy things one can do with new 3.3 API (Tab-Editing, Keyboard-Navigation from Cell to Cell, Editor-Activation with the Keyboard) 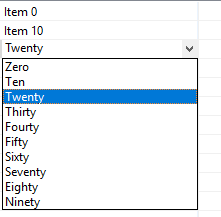 Demonstrates creation of tooltips for cells for pre 3.3 users 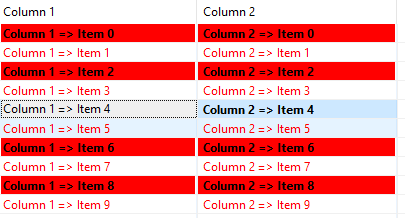 Demonstrates customizability of the 3.3 JFace-Support for cell tooltips using the Browser-Widget and presenting HTML 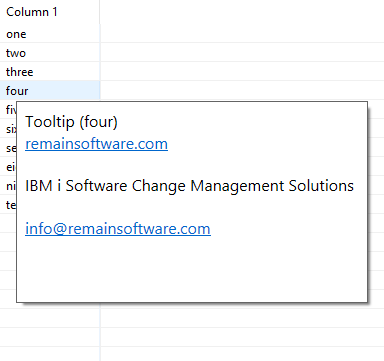 Demonstrates editing support as of 3.2 for TreeViewers

Demonstrates how to achieve alternating row-colors with TableViewer. It can also be used in conjunction with virtual-bits to even work with big tables (e.g. 100,000 rows in this example). In addition, this snippet provided a button that will demonstrate the usage of viewer filters.

Demonstrates the JFace 3.3 keyboard editing support for Trees without columns. Tabbing from editor to editor is supported since 3.4. In addition this snippet provided a button that shows how to enter in edit mode programmatically.

Demonstrates the JFace 3.3 keyboard editing support for Tables without columns. Tabbing from editor to editor is supported since 3.4.

Demonstrates the usage of ILazyContentProvider in conjunction with a Virtual-TreeViewer. The snippet shows how using a lazy tree can minimize the memory footprint and maximize the speed when viewing large models. 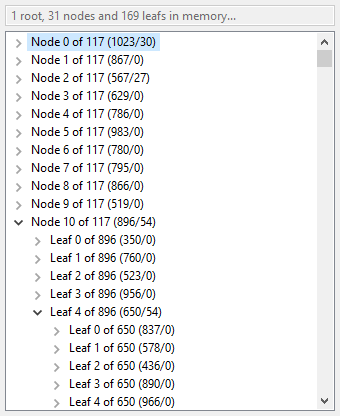 Demonstrates how to overcome a limitation when it comes to key-navigation and CheckBoxEditors in 3.3.1.

This is a workaround for bug https://bugs.eclipse.org/bugs/show_bug.cgi?id=198502

Demonstrates how you can add styled text by wrapping an existing label provider. This Snippet requires SWT/JFace 3.4.

Demonstrate how to center an image and create graphics in a cell using owner draw. 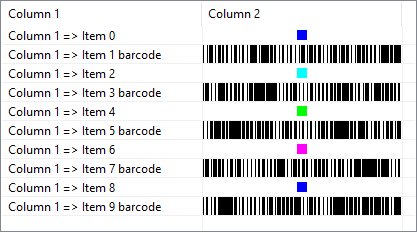 Demonstrate how to start up a cell editor with a context menu and not with mouse clicking on the cell. 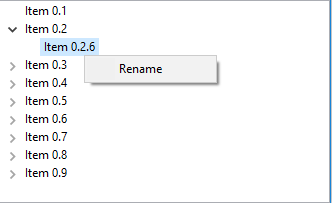 Example of showing how easy cell-navigation with hidden cells is. Use the cursor keys to navigate between cells. Then use the context menu to hide a column.

Shows how to automatically reveal cells when navigating. Run the snippet and then edit the first cell by double clicking. Pressing tab will advance to the next cell in edit mode and reveal the cell if it is not in the viewport. 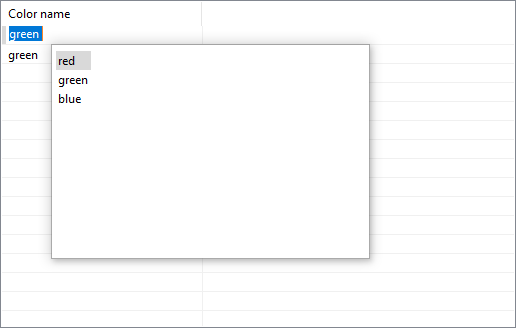 Show how to use ComboViewer and set a inital selection 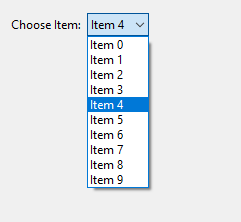 Demonstrates usage of new JFace 3.3 to show really cool ToolTips for your controls

For full fun you also need: 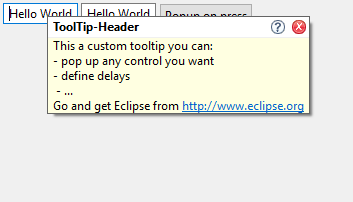 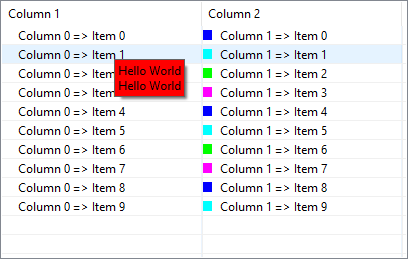 Wizard with Progress and Cancel

Demonstrates a wizard with internal progress.

Wizard with Progress Subtasks and Cancel

Demonstrates a wizard with internal progress using SubMonitor and subtasks. 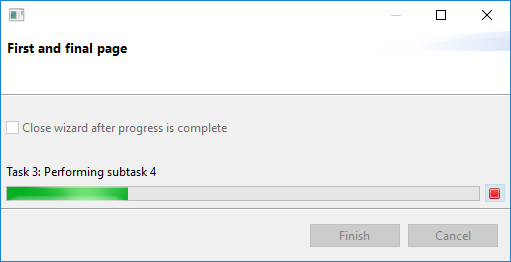