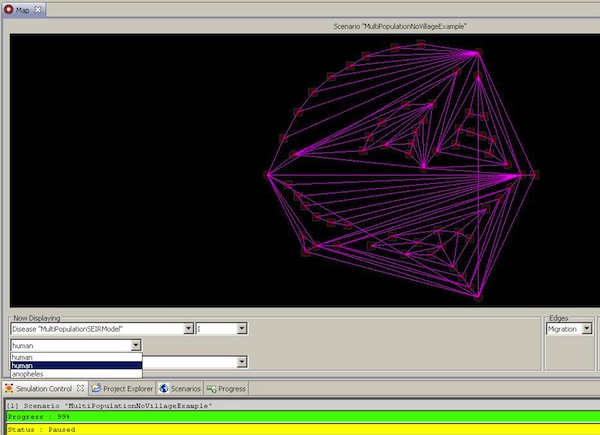 Running the downloadable pajek scenario (with edges displayed) the map view should appear as shown above.
Pajek ([1]) uses a kind of standardized language for describing networks. Some examples might be found here: http://vlado.fmf.uni-lj.si/pub/networks/pajek/testdata.zip. A subset of this language is interpreted by the PajekNetGraphGenerator to import arbitrary graphs into STEM. The PajekNetGraphGenerator allows creating user-defined graphs for STEM and is based on the Pajek format.

An example project available for download may be found on the STEM website [2]. This is a standard STEM project that you may import into your workspace. It contains a graph generated using the Pajek Graph Generator. It also contains examples of the original Pajek files used to create the graphs found in the project. The files are located in the 'Doc' directory of the project. Also in that directory you can find additional documentation. Read the PajekStem_Format.doc for further information about the modified Pajek format. The PajekNetGraphGenerator is available in the graph creation dialogue of STEM. Please see the page Creating a new Graph for information on using this dialog.

The imported Pajek NETs were created with the simple Excel macro Pajek2STEM.xls. This macro allows the easy modification of Pajek NETs; it is not necessary, but makes things far easier - especially for complex graphs. The macro imports a Pajek NET, allows for modification and adding of additional parameters and exports a Pajek NET that is still compatible with Pajek. The usage of this macro is straightforward. It is generally applicable to all Pajek NETs.

The PajekNetGraphGenerator was created and developed by the department of Biological Safety of the Federal Institute for Risk Assessment in Germany.

The following reserved words are supported in the current Pajek Import implementation:

In STEM nodes are the equivalent of vertices. The keyword "*Vertices n" is the starting point for the section, in which each vertex is described using following format:

The keyword "*Edges" is the starting point for the edges section. Each edge is described using the following format:

The keyword "*Arcs" is interchangeable with "*Edges".

In the downloadable project, you will find some examples that may be imported into STEM:

The filename extension ".net" is not mandatory.