In ICE, a Light Water Reactor (LWR) is modeled as a hierarchical tree data structure with the reactor core as the root node. The fuel rod assemblies, which form the core, are modeled as children of this root node. In a similar fashion, each assembly is itself a tree node with different types of rods as its children. Geometrically, the children of each node are arranged using a pre-specified lattice structure. All nodes are realized by objects in 3 dimensional space. The initial LWR model will focus solely on Pressurized Water Reactor (PWR) types.

The reactor core model provides the radial arrangement of fuel assemblies and Rod Cluster Assemblies (RCAs) in the LWR reactor vessel. Additionally, it includes the description of materials outside of the core that may influence the neutronics or coolant conditions within the core. Lastly, it also includes descriptions of the control rod banks (or groupings) to be used for axial positioning control. 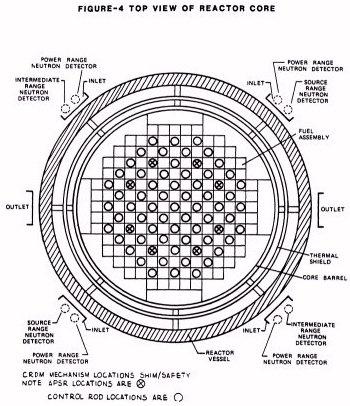 Properties of the reactor core include

*Core bypass flow fraction - the fraction of coolant flow that does not contribute to significant heat removal from the fuel rods, including flow that goes around the core and flow that goes through instrument and guide tubes. 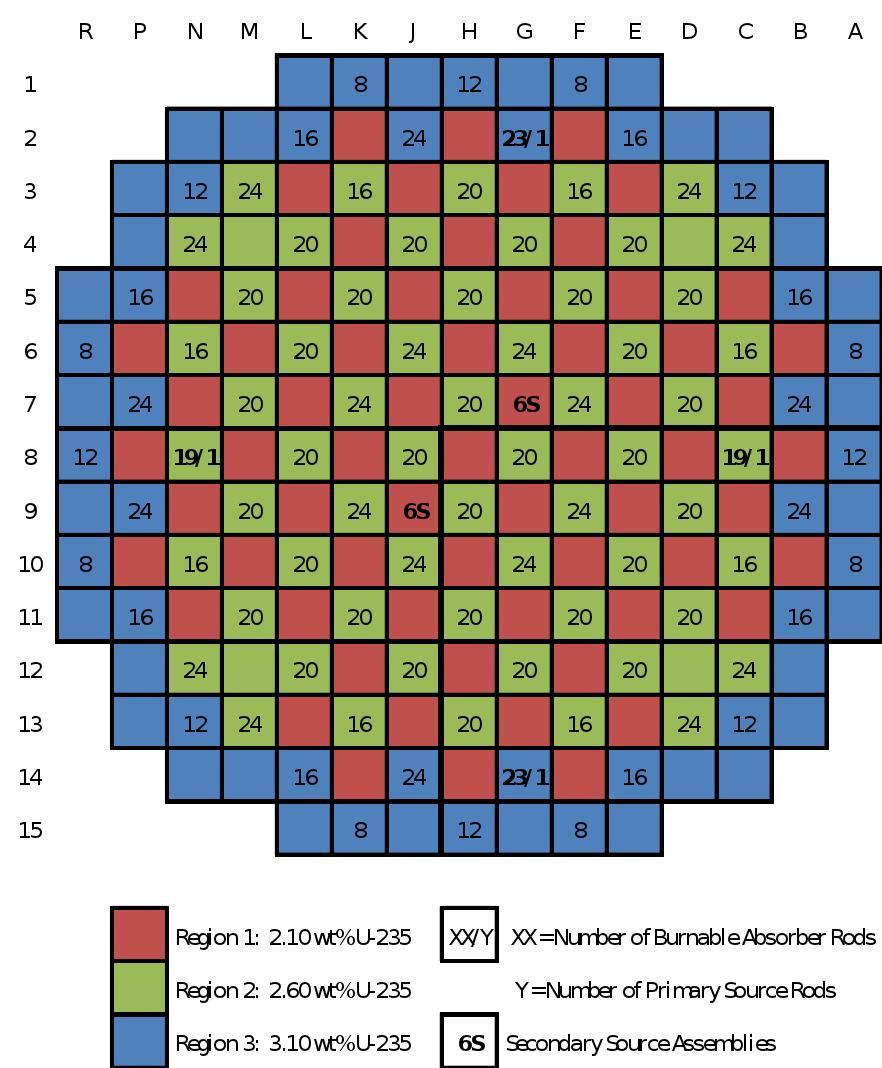 Representative values (defaults) are shown below:

The incore detector system at most PWRs functions by inserting an empty thimble tube into the instrument tube of selected assemblies. This tube is driven into the core from underneath the pressure vessel after the fuel is loaded. The incore detectors travel through the thimble tube and may be movable or fixed during operation. However, the dominant effect of the instruments for the majority of fuel and the majority of time is simply the presence of the SS thimble tube. In the future, this object can be used to provide data for the actual detector itself. 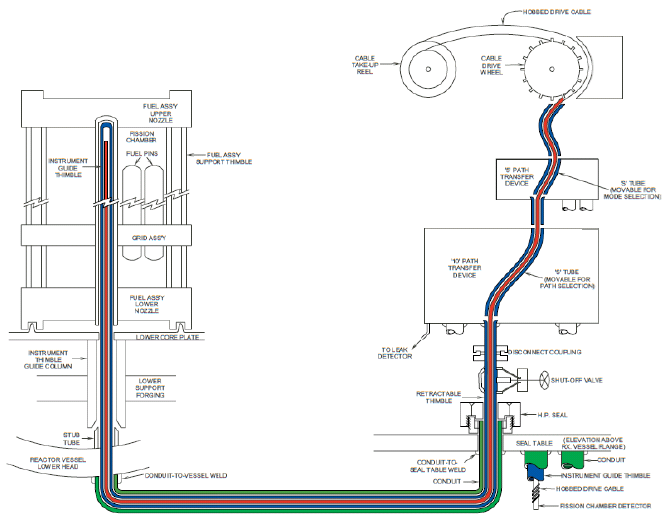 Properties of the incore instrument (thimble tube only) with default values:

Each reactor contains several hundred fuel assemblies arranged in a predetermined core loading pattern. Each fuel assembly provides placement of an array of fuel rods and instrument/guide tubes arranged in a square lattice. The fuel assembly structure is provided by the lower and upper nozzles (or end fittings) connected by the fuel assembly guide tubes. These nozzles provide the connections to the lower and upper core plates. The assembly also contains several spacer grids which provide radial and axial support for the fuel rods and in some cases improve the thermal performance of the fuel by increasing coolant flow mixing.

Objects of the fuel assembly include

Properties of the fuel assembly include: 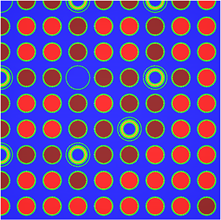 Spacer grids provide lateral support for fuel assemblies and hold the fuel rods in place axially. They are composed of orthogonal straps that have tabs that contact each rod and tube in the fuel rod array. Properties of the spacer grid include: 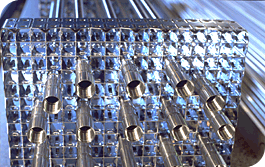 In addition to the grid itself, additional spacer sleeves may be used to attach the grid to the guide tubes. These sleeves may not be the same material as the grid itself. For mixing grids, angled mixing vanes create better T/H conditions for the fuel rods downstream of the grid. There are usually 2 or 3 types of grids, placed axially, in a single fuel assembly:

Non-fuel rods such as discrete burnable absorbers, control rods, thimble plugs, and others (TPBARs) are inserted into PWR fuel assemblies from the top of the assembly during fuel-handling operations. These rodlets are attached to a central hub called a spider assembly which provides the radial and axial positioning of the insert rodlets. The spider assembly rests on the top nozzle of the fuel assembly. The RCAs can be removed from an assembly during refueling, and can even be reinserted into another assembly between fuel cycles.

Some of these clusters which contain control rods are connected to control rod drives which allow the movement of these RCAs axially in the assembly. These clusters are called RCCAs (Rod Cluster Control Assemblies) and have additional properties referring to their movement.

The default layout for an insert rod cluster is as shown above. For RCCAs, all the rodlets will be the same type. For discrete burnable absorbers, the cluster will use a combination of pyrex and thimble plugs, for example. It is important to ensure that the cluster is defined in a way that can be inserted into the assembly guide tubes.

Each rod contained in an assembly is modeled as a set of concentric and/or stacked cylinders of varying width, length, and materials. A typical rod consists of a fuel or poison column contained in cladding. The inner material is smaller than the tubing, providing thermal and irradiation growth space (and created what is known as the pellet-clad gap). An upper (and possibly lower) plenum exists to provide a capture volume for gases produced during operation. The clad tubing is sealed on both ends with caps (or plugs) via some variant of a welding process. In each plenum there is a stainless steel spring which provides compression on the inner material and prevents misplacement during shipment.

All rods must be one of the following types:

The fuel assembly is composed of fuel rods and instrument/guide tubes. For PWRs, the other types of rods will be associated with Rod Cluster Assemblies (RCAs). These rods are somtimes referred to as rodlets for differentiation from the enter cluster. These rods can be inserted and removed from the fuel assembly guide tubes at any point during assembly handling operations (i.e. not during operation), and control rods can be moved axially during cycle operation.

Objects of a rod

The default rod can be considered as a solid zircaloy rod with the following properties:

It may be desirable to separately define an object for the fuel/poison column in the rod.

It may be desirable to give the default rod a default fuel/poison column capability of N numbers of concentrate rings of materials.

Fuel rods are a special instance of a rod. Fuel rods contain a stack or column of fuel pellets. This pellets are typically UO2 and may include integral burnable poisons. Gadolinia (Gd2O3) can be mixed with the fuel homogeneously in concentrations up to ~8%. IFBA (ZrB2) can be sprayed onto the outside of the fuel pellets prior to being loaded into the rod cladding, in predetermined thickness and boron loadings. IFBA and Gadolinia are exclusive from one another, meaning they are not both used in the same fuel assembly. The pellets that make up a fuel stack can be axially varying, such as low enriched on the ends, high enriched in the central region, and IFBA coating in only a portion of the central region. Also, fuel rods may vary in the assembly itself. 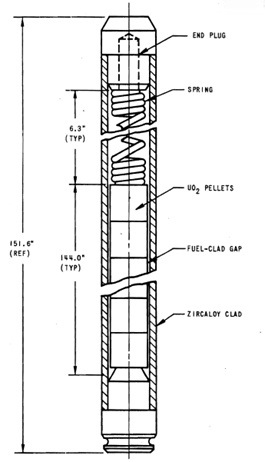 It may be desireable in the long run to explicitly represent the fuel stack as a class containing a stack of pellets. However this is unnecessary for now.

Properties of a regular UO2 fuel rod (in addition to the base rod properties):

The default fuel rod will have the following properties:

Properties (in addition to the UO2 Fuel Rod specification) of an integral burnable absorber IFBA rod.

The default IFBA rod is the default fuel rod with the following additional properties:

Properties (in addition to the UO2 Fuel Rod specification) of an integral burnable absorber GAD rod.

The default Gadolinia rod is the default fuel rod with the entire central stack region (12'-2*6") contained Gd2O3 homogenously mixed into the fuel material.

Discrete burnable absorber rods (or rodlets) and control rods are connected to spider assemblies and can be inserted into fuel assembly guide tubes in various radial arrangements. This allow for the insertion and removal of neutron absorbers during fuel handling procedures throughout the life of the fuel assembly. There are several common burnable absorber rod types, such as Pyrex (borasilicate glass), Boron Carbide (B4C), Silver-Indium-Cadmium (AIC), Boron-Carbide and Aluminum Oxide (WABA), Inconel, etc. 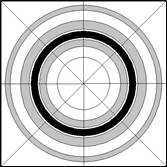 Some discrete burnable poisons have annular poison material, while some are solid stacks of pellets or simply solid rods. The annular poisons may also have an inner clad in addition to the outer cladding.

Properties of a solid burnable absorber rod (in addition to the rod properties):

Instrument and guide tubes are hollow tubes in PWR reactor fuel assemblies which allow for the insertion of discrete poison rodlets (Guide Tubes) and instrument thimbles (Instrument Tube). These tubes also serve as the axial support structure for the fuel assembly connecting the lower and upper nozzles, while the fuel rods are allowed to "float" in the assembly (connected only by spacer grids to the tubes). An unobstructed instrument/guide tube allows reactor coolant to flow through it.

Objects of an Guide Tube

Objects of an Instrument Tube

Properties of an Instrument/Guide Tube:

The default instrument/guide tube has the following properties:

State point data of the reactor include