Rules are the basic building blocks of model transformations in Henshin. A rule comprises two graphs, a left-hand side (LHS) and a right-hand side (RHS) graph. LHS and RHS specify model patterns on abstract syntax level. Nodes correspond to model elements, edges correspond to references between model elements. The LHS describes a pattern to be matched. The RHS specifies a change on the input model. Nodes and edges occurring in the LHS or RHS only are deleted or created, respectively. Node mappings between LHS and RHS declare identity, i.e., nodes and edges being preserved. Nodes possess attributes. Attribute conditions can be defined whose expressions are evaluated by a JavaScript engine at runtime.

Rule-nesting is a powerful concept providing a for-each operator for rules. In nested rules, the outer rule is referred to as kernel rule and an inner rule as multi rule. During execution of a nested rule, the kernel rule is matched once and used as a starting point to apply the multi rule as often as possible. Multi-node mappings allow to specify identity between kernel and multi rule nodes.

Iterated Units have one sub-unit. The sub-unit is executed as often as specified in the iterations property. 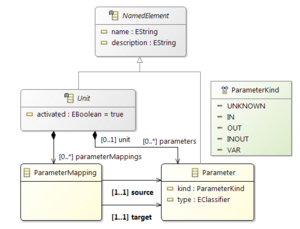 Parameters allow to shape the behavior of units and rules with variable information that is typically not present before execution time. Parameters are defined as part of the rule and can then be used in elements of the rule, e.g., as attributes and in attribute conditions. Parameters can be set from the environment using the API or the graphical interpreter wizard. Parameters values set from the environment are used during matching. In turn, parameters that were not are set by the matchfinder to the values found in the respective objects. This can be used to propagate values between LHS and RHS elements.