Model transformations in Henshin are defined using matched transformation rules. There are currently two editors available for rules: a tree-based editor (EMF) and a graphical one (GMF).

Henshin transformation rules mainly consists of two Graph objects, commonly referred to as LHS and RHS (left- and right-hand side), and mappings between nodes from the LHS and the RHS. The LHS is the graph pattern matched by the rule. The RHS describes the action of the rule, e.g. whether objects or links should be deleted. The maapings from the LHS to the RHS encode which objects should be preserved by the rule.

The graphical editor uses a more intuitive way of representing rules. Essentially, elements in a rule are annotated with actions such as <<create>>, <<delete>>, <<preserve>> and <<forbid>>. A screenshot of a simple, but not very meaningful, transformation rule in both editors is shown below. Note that you need to import EMF models first in both editors. This can be done using the context menu. In the graphical editor, all classes automatically appear in the palette on the right. 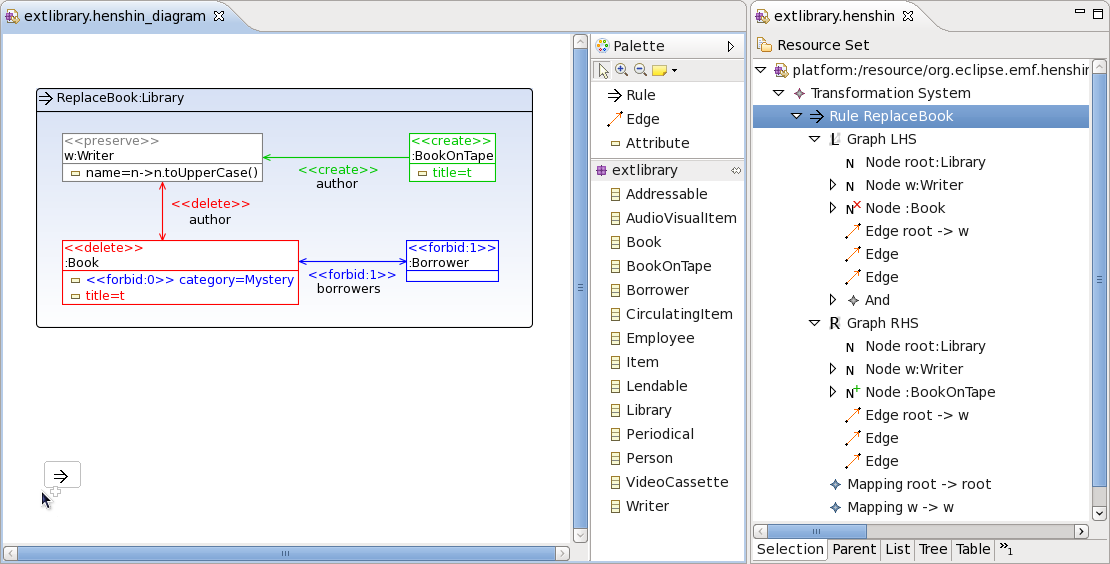 The example rule is called Test and it matches two objects, one of type Library and one of type Writer. Additionally, the writer instance must be contained in the library instance via the writers containment reference, and its name attribute must be set to "Smith". The last condition that must be fulfilled for that rule to be applicable is that the library instance must not contain a instance of type Book in its books containment reference. This is a so-called negative application condition (NAC).

In the graphical editor this can be realized using a <<forbid>> action. These actions can have an optional parameter that serves as an ID for the negative application condition. For instance <<forbid:0>> and <<forbid:1>> describe two different NACs. If two elements are associated to the same NAC it means that the two objects must not be present together. If they have different IDs neither of them is allowed. This essientially corresponds to logical AND vs. OR.

If all the above conditions are fulfilled, our example rule can be applied. It performs the following actions in an atomic step: delete the writer instance from the library and create and add a book instance to the library. Note that you can also define attribute calculations (not shown in this example).