This article will show you how to use OSGi Declarative Services in Gyrex. As a example the GreetingService will be implemented and can be used in later tutorials to let the consumer "greet". Using Declarative Services the GreetingService will be made available in the OSGi framework. To make this possible an OSGi DS component has to be created. A well structured pattern provides the service as an interface which will be re-implemented in a component class. This class keeps the reference to the real implementation and only delegates to it. The hole sample-project with all classes described later in the article you can find here (zip-file). 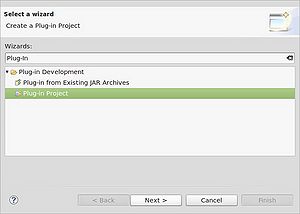 The first step is to create a new plug-in project by clicking File -> New -> Other. Typing in "Plug-In Project" and select the shown option. After clicking Next, give your project a name like "sample.service". In the section Target Platform select "Equinox" as the OSGi framework. At this time we don't need an Activator so deselect it on the next page. Here you also can give a special name for your plug-in. On the next page you can choose, whether you want to create the plug-in with templates, but just remove the check mark on this page. Clicking Finish on the next page the project will be created.
Now it's required to import some packages. To do so open the MANIFEST.MF of your project. You will find this file in the folder META-INF. Switch to the register MANIFEST.MF and add following lines:

Add following line to the MANIFEST.MF, too.


Note that there has to be a space line below the text. 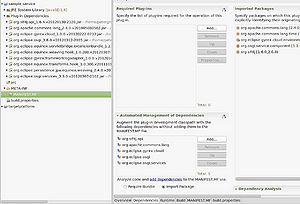 With this packages you will be able to start the server at the end of this tutorial with the OSGi framework in which your bundle is available. You still need to implement your service. To do this you have to create a new package with the same name as your project with a right-click on src in your project selecting New -> Package. This package will contain at least 4 classes. In this example there are:

GreetingService is an interface providing methods. This methods later will be re-implemented by several separate bundles, which can be later added dynamically to the running system. Therefore this class wouldn't be placed in the same bundle as the classes re-implementing the interface, but in a seperate bundle. In this example there are three methods to be implemented. 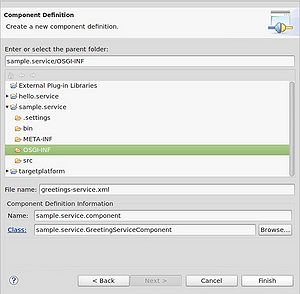 Once you have implemented your classes now you have to tell the OSGi framework, that you have implemented a new component to use. It is necessary to tell the framework which interface you provide and which class the interface provide. In order to do this create an new folder in your project called "OSGI-INF" and then create an OSGi DS component there. Right-click on this folder -> New -> Other. Type in "Component Definition" and select the shown option. On next page the parent folder should be "sample.service/OSGI-INF". The file name in this example is "greeting-service.xml". Maybe you will name it "yourname-service.xml". In Component Definiton Information the Name is "sample.service.component" and the class is the "sample.service.GreetingServiceComponent", which is the called class and delegates to the real implementation. By clicking on Finish this file will be created, too.
After you opened this file switch to the register Source. There, methods activate and deactivate have to be added.

To Start the server now, you have to setup the debug configurations. To accomplish this right-click on your project, choose Debug As -> Debug Configurations... Right-clicking on Eclipse Application an choosing New opens the page to set up the configuration. To set up a name just type it in the box Name. In the section Program to Run select Run an application and org.eclipse.gyrex.boot.server. After switching to the register Arguments you have to add "-console" to the program arguments in order to be able to monitor the state of the components.

With clicking Apply and then Debug the server will start. Now open the console view where you can monitor all necessary bundles are starting. Once you read the line: [Worker-0] INFO o.e.jetty.server.AbstractConnector - Started SelectChannelConnector@0.0.0.0:3110 first press Enter and you can issue a few console commands to check your components state. Possible commands are: 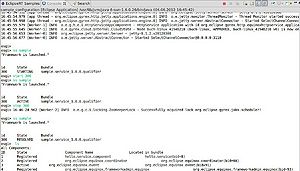 At this point this tutorial finishs. Now you have implemented a component in OSGi Declarative Services with the possibilty to change the state of it. It's the basis to implement whole OSGi frameworks. How it's said at the beginning, an interface normaly is separated in an extra bundle from which you want to access the real implementations dynamicaly according the scenario. This will be shown in a next tutorial.