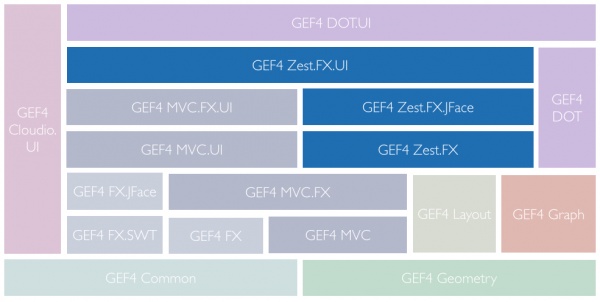 The LayoutContextBehavior maintains a GraphLayoutContext, i.e. it is responsible for the creation of such a layout context, updating the layout bounds (based on the corresponding GraphContentPart), and initiating layout passes (based on content or bounds changes).

The HidingBehavior, EdgeHidingBehavior, and EdgeLabelHidingBehavior react to changes in the HidingModel by hiding/showing the corresponding visuals. In addition, for nodes, a HiddenNeighborsPart is created when any neighboring nodes are currently hidden.

The SynchronizeChildrenOnZoomBehavior starts a content synchronization when the zoom level is changed. This is necessary for consecutive zooming since a NodeContentPart returns its nested graph only when a certain zoom level is reached.

It also provides a GraphSubgraphLayout that groups node layout adapters, which is currently unused and will be removed in the future; see bug #469469 for details). Furthermore, GraphLayoutContext and LayoutModel will be merged in the future, as indicated in bug #469466. 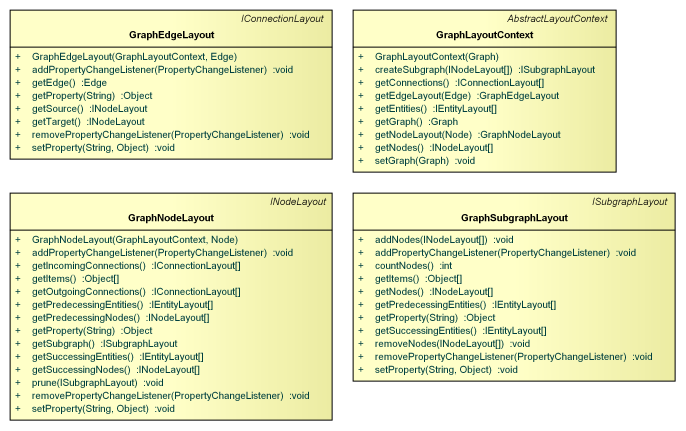 The creation of layout adapters is performed by a GraphLayoutContext (i.e. a LayoutModel) for each graph (root as well as nested). It is registered as an adapter on the GraphContentPart that controls the graph or nested graph respectively, and can thus be retrieved as follows:

The attributes contained in graph model elements and the layout properties (contained in the layout adapters) are transferred within LayoutContextBehavior and NodeLayoutBehavior, which update the required layout attributes of the layout adapters before each layout pass (based on the positions and sizes of the visuals) and refresh the visuals afterwards (the graph model elements contain no properties related to positions and sizes).

It also provides a LayoutModel, which will be merged with GraphLayoutContext in the future, as indicated in bug #469466. 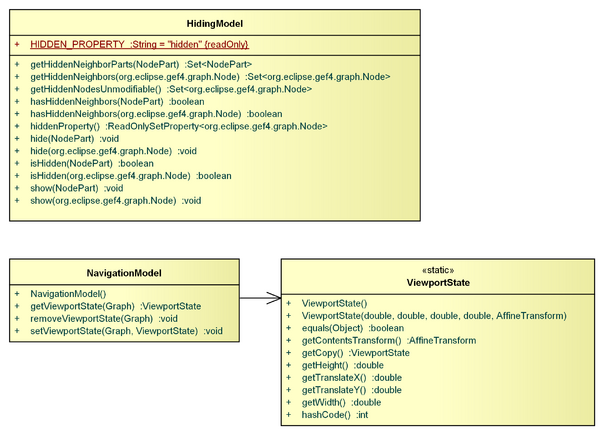 The LayoutModel is a specific GraphLayoutContext that will create an empty default graph if no graph its provided. It is adapted to each GraphContentPart and controls the related graph model element.

The ViewportStackModel is a viewer model needed to persist viewport configurations. It is used to keep track of all viewports that are passed during nested graph navigation when zooming in and can be used to restore viewports when zooming out again.

The Operations package currently provides only a single operation for the hiding (visible) and showing (invisible) nodes (HideOperation). 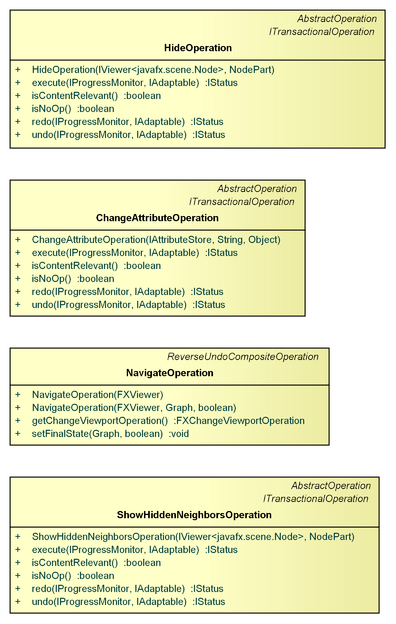 The HideOperation is used by HideNodePolicy to hide or show nodes. It adds/removes a respective content part to/from the HidingModel. 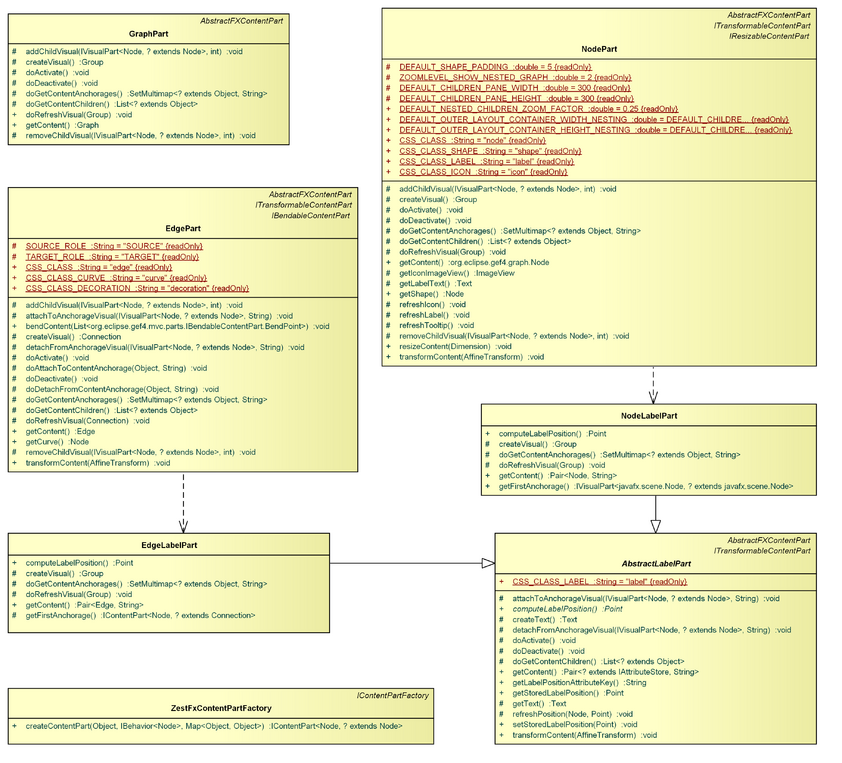 In addition, it provides specific AbstractFXHandlePart implementations (ZestFxHidingHandlePart and ZestFxExpandingHandlePart) to realize hiding and showing of nodes via hover handles.

There are also specific AbstractFXFeedbackPart implementations (HiddenNeighborsPart and ZestFxEdgeLinkFeedbackPart) to indicate feedback for hidden nodes and anchor links (from edge labels to their related edges).

Last, the package provides a specific ZestFxCursorProvider that contributes a specific cursor to indicate rotation during handle-drag based rotation.

The GraphRootPart is a specific org.eclipse.gef4.mvc.fx.parts.FXRootPart that adds support for CSS styling. In detail, it loads a file (STYLES_CSS_FILE) with default CSS styles and applies it as stylesheet on the javafx.scene.Scene.

The ZestFxHidingHandlePart and ZestFxExpandingHandlePart are complementary org.eclipse.gef4.mvc.fx.parts.AbstractFXSegmentHandlePart implementations that are used as hover handles. Being anchored on a respective NodeContentPart, they react to mouse clicks and delegate to the respective HideNodePolicy to perform hiding or showing of nodes.

The HiddenNeighborsPart is a specific AbstractFXFeedbackPart that indicates the number of hidden neighbor nodes via a circle decoration (with a number label).

The ZestFxEdgeLinkFeedbackPart provides anchor link feedback support between EdgeContentPart and EdgeLabelPart, indicating a dashed feedback line, which is anchored at the edge visual, whenever the label is moved.

The ZestFxCursorProvider contributes a specific rotate cursor that is shown when performing interaction via corner handles, when CTRL-key is pressed (which corresponds to rotation of nodes). It is enabled by FXCursorBehavior. 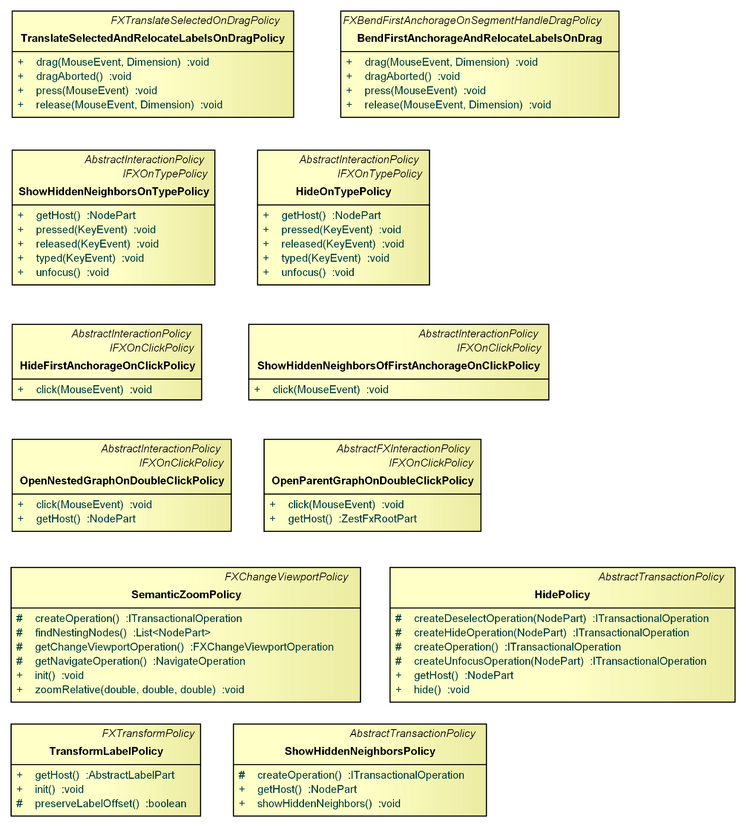 The FocusAndSelectFirstAnchorageOnClickPolicy is registered as an adapter on EdgeLabelParts in order to focus and select the corresponding EdgeContentPart when the user clicks an edge label.

The OffsetEdgeLabelOnDragPolicy is a specific AbstractFXOnDragPolicy that enables the positioning of edge labels (i.e. EdgeLabelPart) during mouse drag. 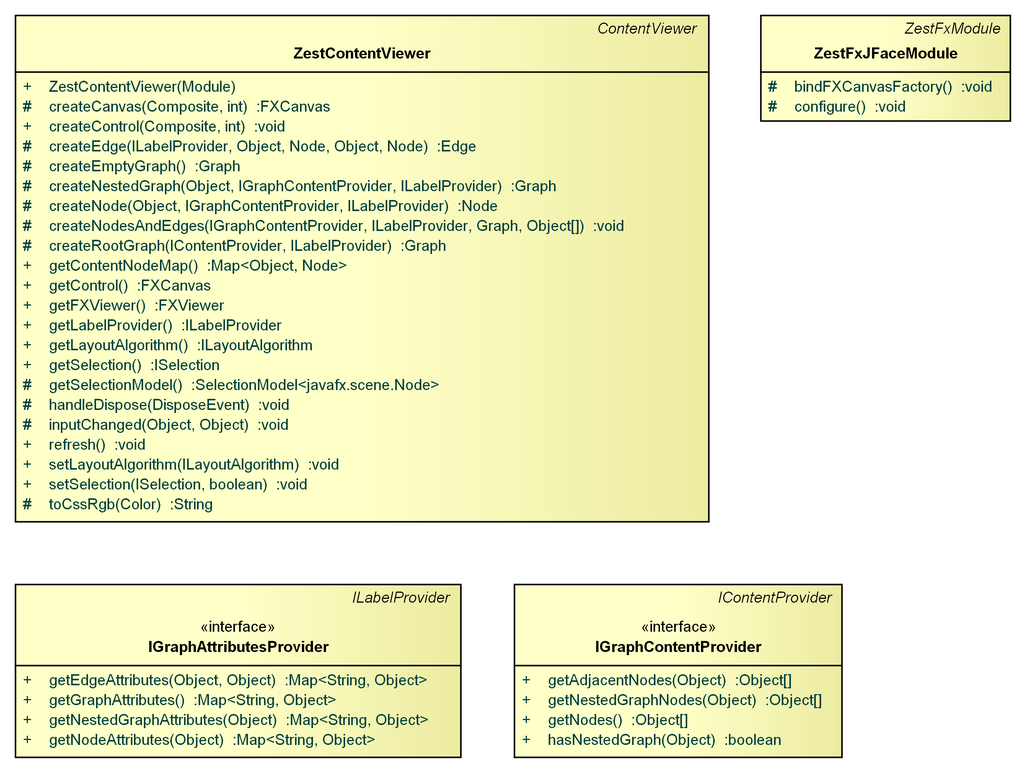 The IGraphNodeContentProvider is responsible of returning those input elements (getNodes()) that are to be visualized as nodes, and to provide information about which nodes are connected via edges to other nodes. The IGraphNodeContentProvider is node-based, i.e. the to be visualized edges are only represented implicitly, by providing the connection target nodes of a node via getConnectedTo(Object), and are not explicitly mapped to underlying input elements.

The INestedGraphContentProvider is responsible of returning the nested nodes of a given node (getChildren(Object). It extends the IGraphNodeContentProvider, so that edges can also be inferred between nested nodes, i.e. those being returned as children.

The IGraphNodeLabelProvider, in addition to the standard label provider functionality, is responsible of returning attributes, i.e. ZestProperties for a root graph, as well as for nodes and edges. The INestedGraphLabelProvider in addition returns those attributes for nested graphs.

The ZestFxUiModule extends MvcUiModule and thus delivers specific bindings related to the integration of Zest.FX with the Eclipse Workbench UI.