GEF4 is the unified effort to develop a new GEF 4.x code base as a modernization of the current one (Draw2d, GEF (MVC) 3.x, and Zest 1.x, in the following referred to as GEF proper). Being developed in parallel to maintaining the GEF proper code base, GEF4 is set up as a set of provisional components, not being bound to the same API compatibility constraints.

Having functionally completed the GEF4 Geometry and GEF4 Cloudio components, work is currently being spent on developing a JavaFX-based replacement for the core of GEF (GEF4 FX, GEF4 SwtFX, GEF4 MVC), as well as further migration of the former Zest2 code base (GEF4 Layout, GEF4 Graph). 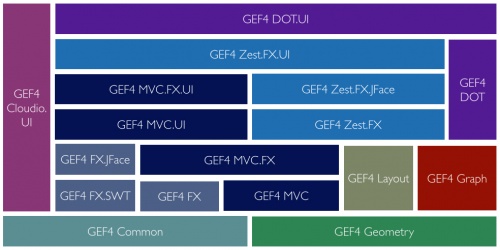 The complete source code of GEF4 is located in the GEF4 Git repository. For further information on how to obtain it and how set-up in order to contribute, please refer to the GEF Project Contributor Guide.

A Tycho-based build infrastructure for the GEF4 provisional component has been configured under https://hudson.eclipse.org/hudson/job/gef4-master. The build job is triggered hourly in case of changes to the source code repository and further once per day. It produces an update-site, which does not get promoted to downloads.eclipse.org, but can directly be consumed from:

In addition to this, integration, milestones, and release builds are promoted to downloads.eclipse.org and can be found here:

Note that while integration builds are promoted automatically once per week (every friday), milestone and release builds are published only manually on the respective occasions (not yet). Further note that these update sites are merged (so old builds are preserved), while the nightly update site gets replaced on each build.