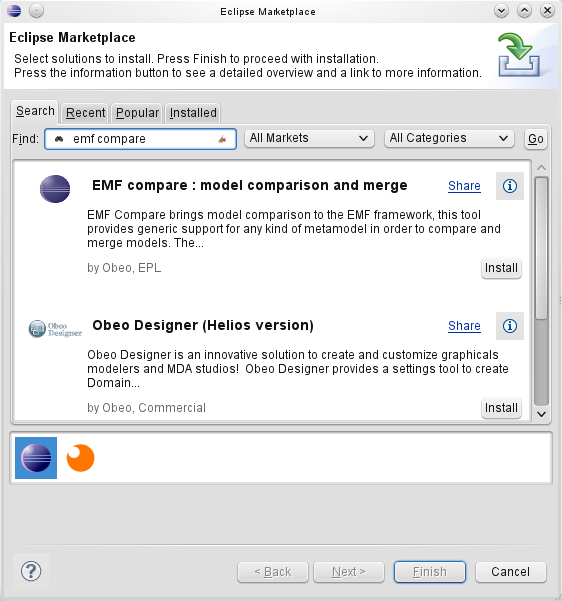 With the following, we'll follow the life cycle of a metamodel describing a very basic library as it evolves separately in different branches. This will allow us to give more concrete examples of how EMF Compare can be used, and how it can help you.

The two models will be commited to our git clone. The whole thing looks like this : 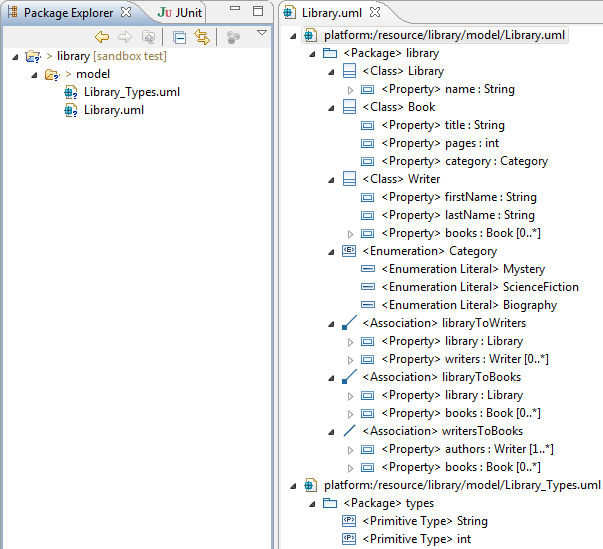 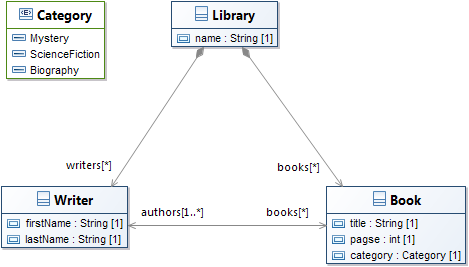 Now that this initial model file has been committed, we'd like to improve it a little. For example : 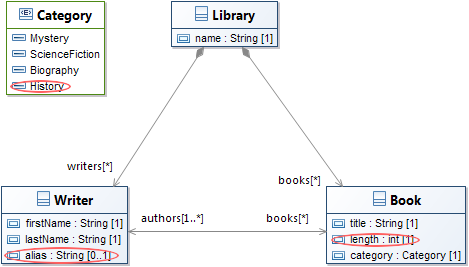 This will open a comparison editor that initially looks like the following : 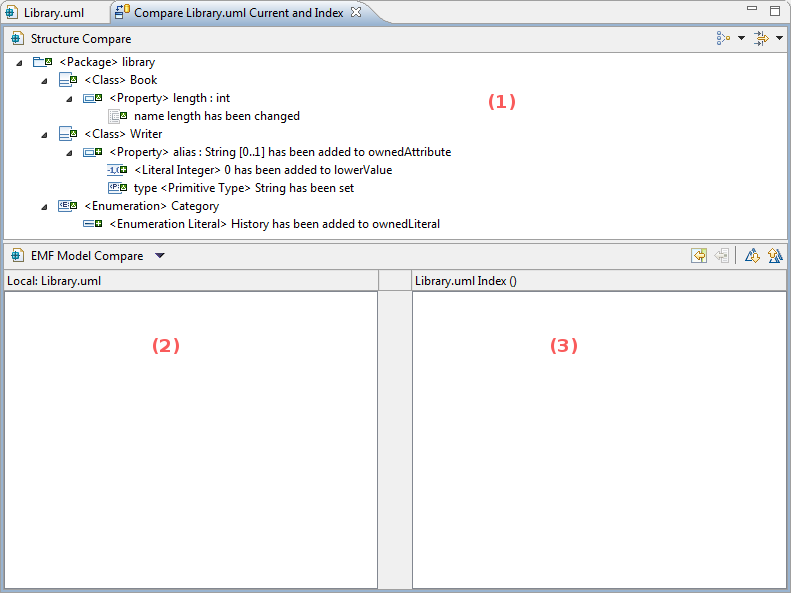 There are three main areas of interest in this editor.

As stated above, (2) and (3) are initially empty. These two panels are there to display more information about the differences detected between our models. Let's select one of the differences displayed in (1) : 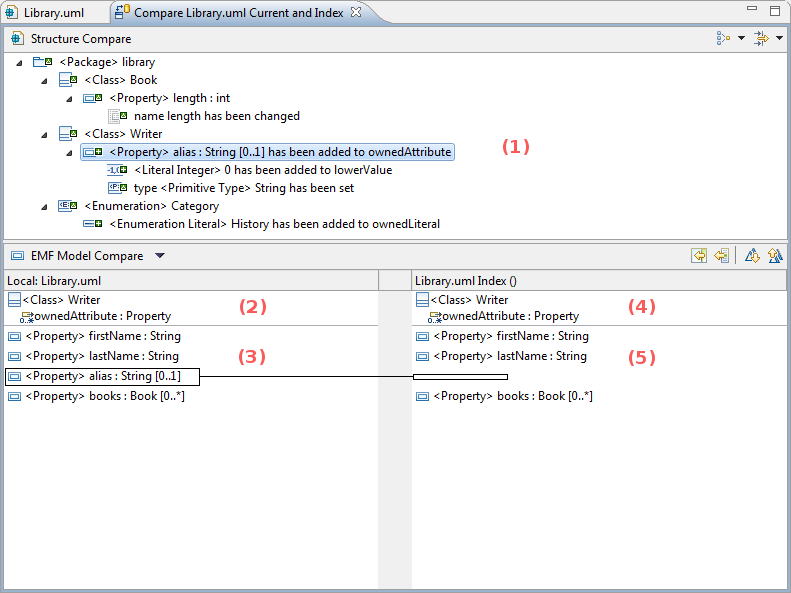 This is useful in order to determine exactly what changed in our version, but serves no other purpose : merging changes here would only mean reverting back our modifications to the "clean" state from the repository. Let's commit our changes.

Now, we'd like to create a new feature for our library : we'd like clients to be able to borrow our books. We'll branch our repository in order to create this new feature and name this new branch borrowables :

Starting right away, we add the necessary new concepts to our model to represent the possibility of lending books. We "may" later need to have more than books to be lendable, so let's make a Borrowable interface to hold this concept. We'll also need a Person class, as well as a new data type to represent the person's birth date : 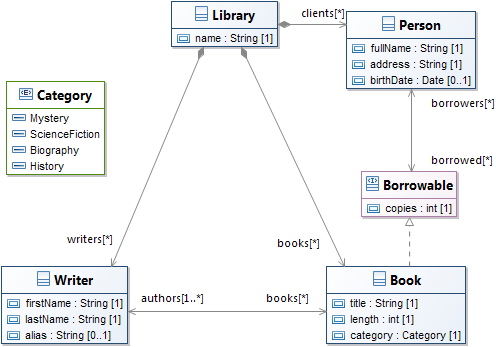 In a tree viewer, our models now look like (highlighted in red, the concepts we added with this step) : 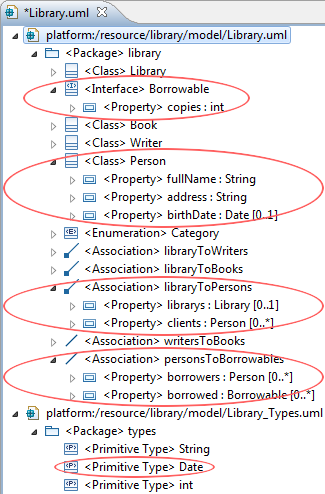 However, while we are working on our borrowables branch, the master branch may still evolve : other people on the project might be adding new concepts of their own, or we could be switching to the main branch for a high priority fix ourselves. Let's imagine that two features have been added since we branched our repository. First, someone needed to have the library hold not only Books, but also Magazines. Second, we needed the publication date of our Books and magazines to be recorded.

The first of these two commits will add the following concepts to our master branch's model : 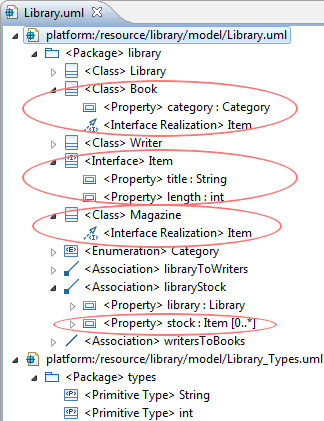 While the second only adds a primitive type and a property : 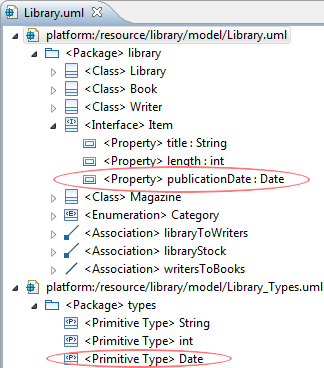 If you have followed to this point, we now have two diverging branches, master and borrowables which both hold a different version of our library.uml model. Here is how these two models look like at this point : 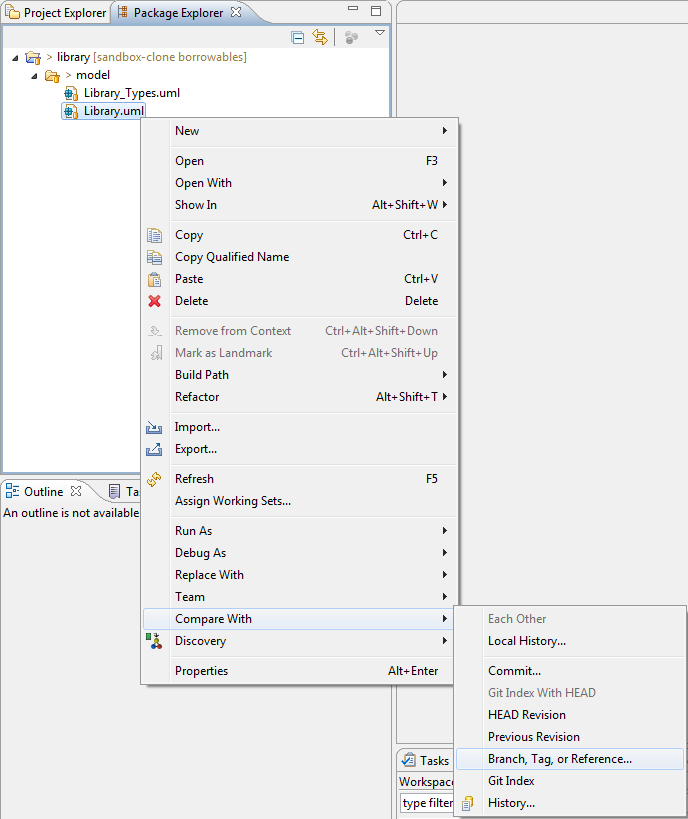 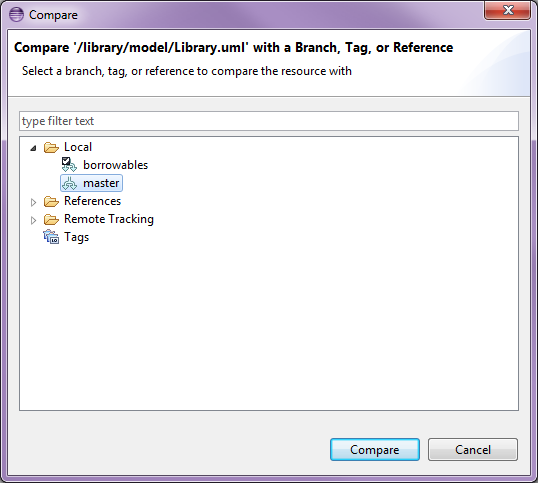 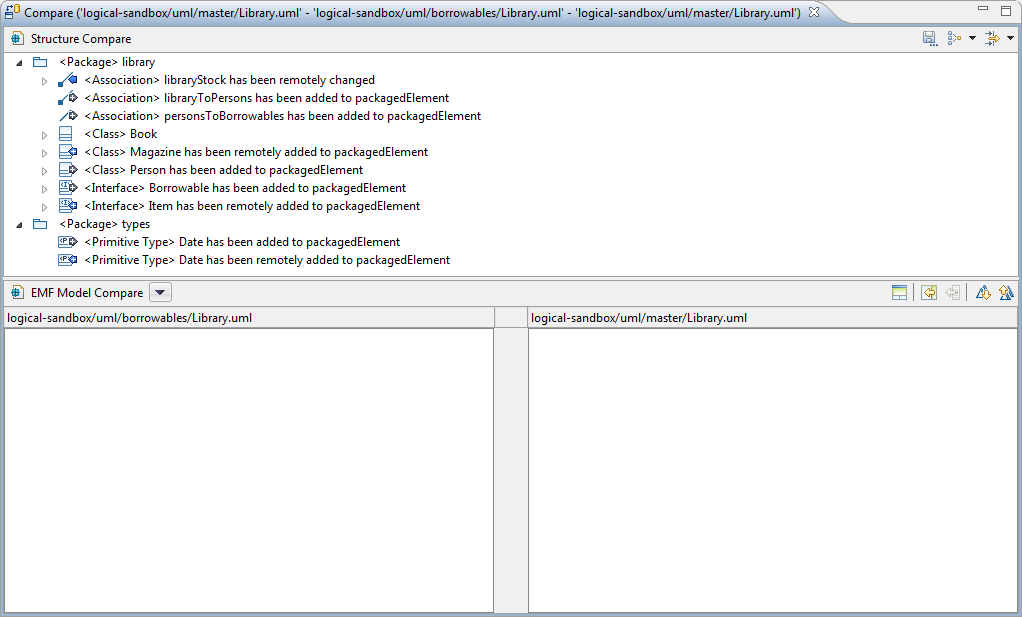 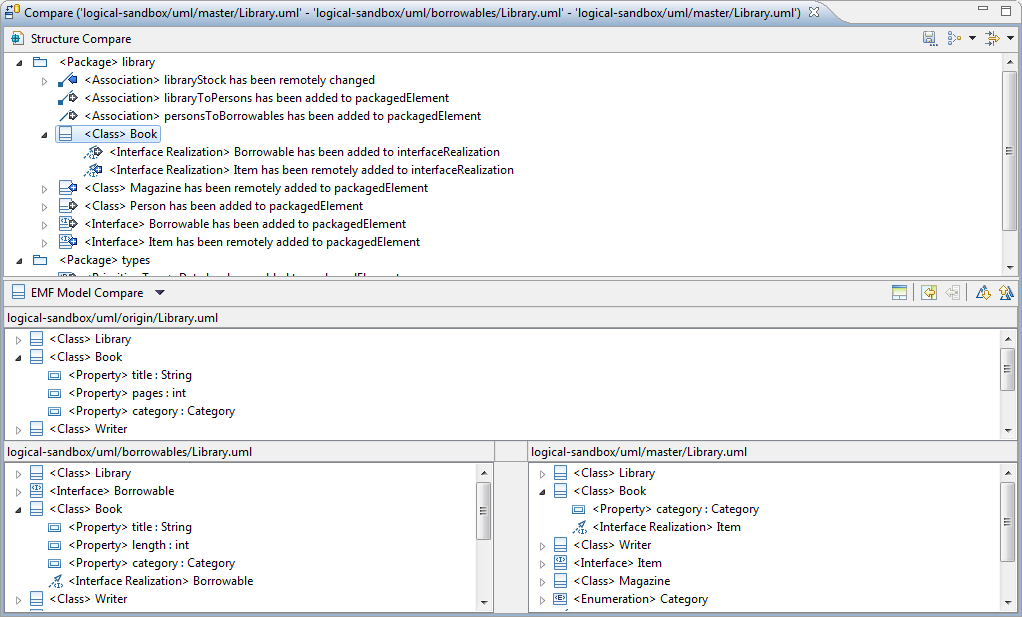 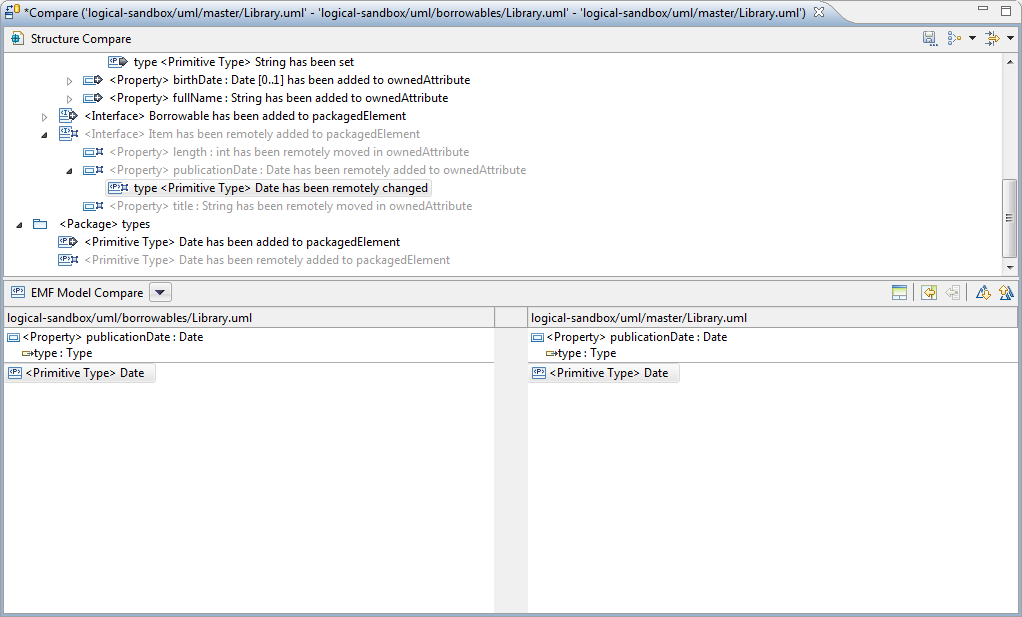 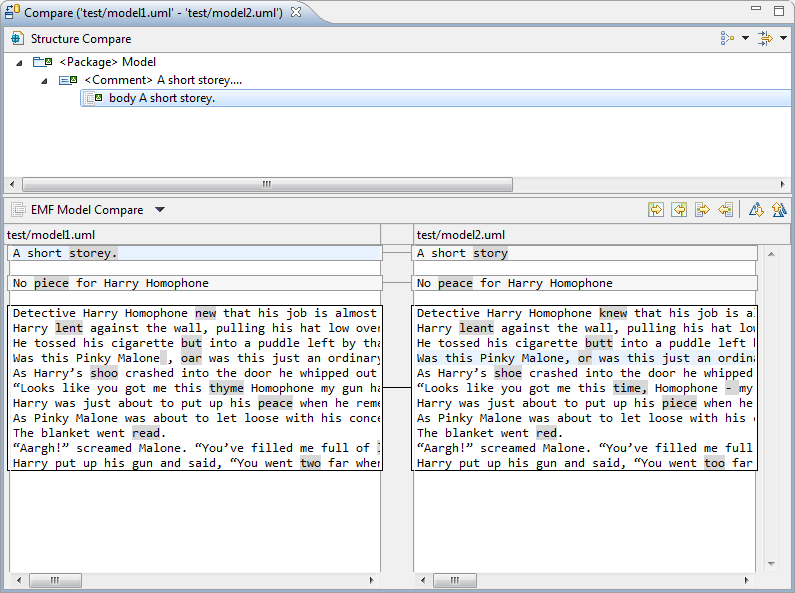 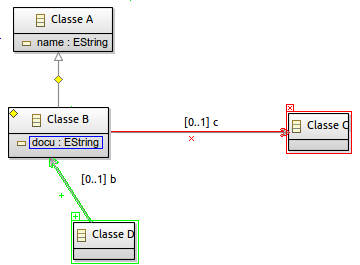 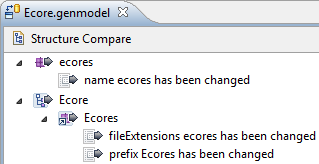