The EEF workflow is the same than many others projects of the Eclipse Modeling Project :

The custom can also be done by adding custom code in dedicated area in the generated code (called "user code area"). Acceleo will keep this code in the next generators invocation.

This document will describes all these steps in the user point of view.

The EEF editing components are designed with three models conform to four metamodels. This models are :

The views modeling is made with a model conform to the EEF views metamodel. The root element of this model is a ViewsRepository. A ViewsRepository has a name and an optional documentation. A RepositoryKind property can be set but isn't used in the generation. This will be done in the next release.

A ViewsRepository contains Views and/or Categories. A Category doesn't step in the generation, it's just an element used to organize the Views. A Category only have a name and a documentation.

It's possible to create Views in a ViewsRepository of in a Category. A View represents a list of editors, called in EEF ElementEditor, which will be generated in the final editing component. A View shouldn't necessarily be defined for a particular element of the mapped meta-model and you don't have to create one ElementEditor for all the structural features of a given type. We'll see in next section that views can be referenced in several contexts. A View have a name, a documentation and can be defined as Explicit or not. A View is explicit when it is directly used by a component, not when it is referenced or compounded (see advanced topics).

The last concept for the view modeling is the Container. A Container group together widgets in order to generate graphical delimitation around these widgets or to change the default layout use by EEF. A container have a name, a documentation and a representation defining the behaviour of the container.

Table below describes editors available in EEF runtime and the kind of EObject properties they can manage. Green ticks indicate stable editors, orange ticks those under development.

This table shows editors able to manage several kind of properties. The EEF generation module will produce controller associating the given editor with the target properties.

For the Containers, there is two stable representation available :

Until now we have seen concepts to define static views composed of containers and editors. EEF have also mechanisms to make references between views and to compose dynamically views.

In addition to containers and editors, it is possible to create ViewReferences. This item is used, as its name suggests, to reference another view of model. This element will cause during generation the inclusion of views referenced in the main one. 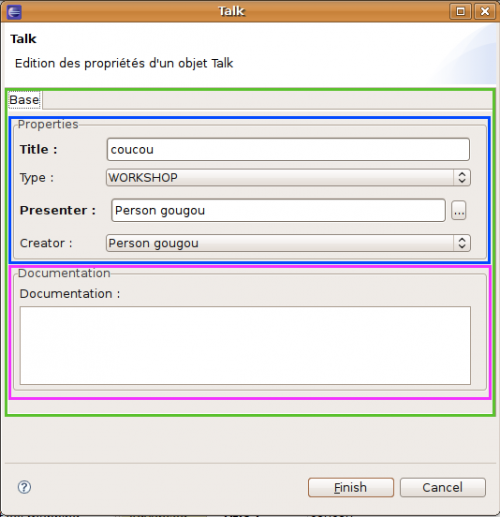 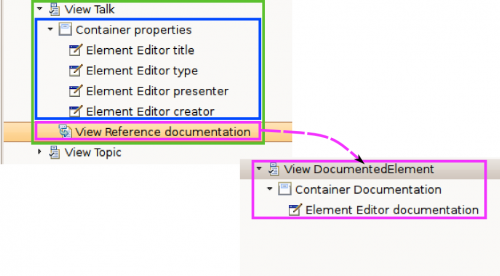