To complete a Contribution Questionnaire, log in with your committer credentials to the developer portal.

Note that the Eclipse IP Team cannot validate the history initial contribution; the initial contribution must be provided in the form of a snapshot of the project code and must be committed as it is reviewed (i.e. old history must, unfortunately, be left behind).

Contributions should have a record in Eclipse Bugzilla with either a patch, or information about the source (e.g. see Handling Git Contributions). Patches must be attached by the contributor themselves (who has implicitly agreed to our Terms of Use).

As part of the approval process, the author of the contribution will be asked to assert the following on the Bugzilla record:

A Contribution CQs, which should include a reference to the Bugzilla record, are created using the Eclipse Developer Portal.

Note that this list is not intended to be exhaustive. Also note that CQs for third-party libraries are version-specific. That is, a separate CQ is required for different versions of the same library.

There are some special cases in the form of "except prerequisite" and "works with" CQs. For more information, please see the Eclipse Policy and Procedures for Third-Party Dependencies. 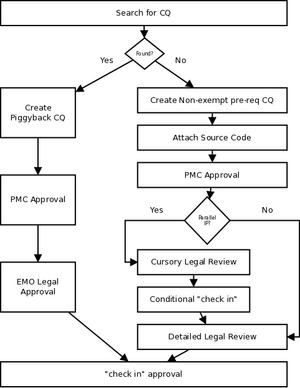 Be advised that this process may take a while. The actual amount of time that it takes to process a CQ depends on numerous factors including the size of the queue, and the nature and size of the contribution.