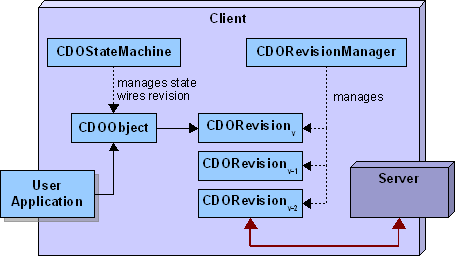 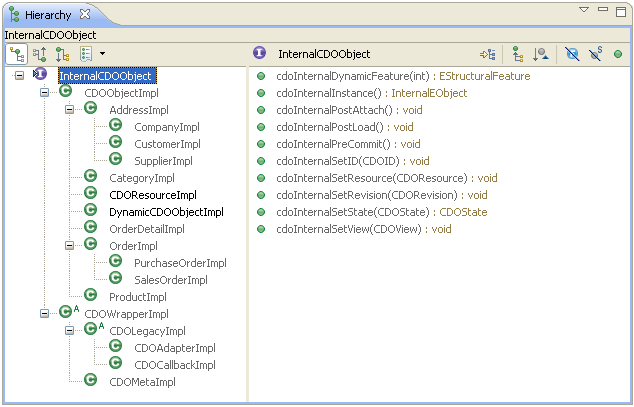 CDOObjects do not just appear out of the dark. To create, load or access them you need, as usual in EMF, an instance of a Resource, here a CDOResource. The following diagram illustrates the CDO client infrastructure concepts and their relation to CDOObjects:

A CDOSession is your connection to a single repository on a CDO server. Before you can do anything with CDO you need to open a session.

There are two ways to obtain a session:

In CDO 3.0 you may need to use this instead:

A CDOView is a partial, yet consistent view onto a model repository. It represents the parts of the overall object graph currently viewed by the client.

Views, in contrast to sessions, are considered light weight entities in CDO, such that you can open and close them as often as you want. There are (nearly) no server side resources associated with a client side view. A CDOView can be seen of as the mediator between an EMF ResourceSet and the loaded objects' state which is managed by the CDORevisionManager of the CDOSession.

Instances of CDOTransaction are the only views that permit read-write access to the contained resources and objects. All changes are recorded by a transaction until the application decides to either commit or roll back the transaction.

You can also use a CDOTransaction with an existing EMF ResourceSet:

Instances of CDOView are by default floating views that permit read-only access to the contained resources and objects. They always show the latest changes of the repository.

You can also use a CDOView with an existing EMF ResourceSet:

As of CDO 3.0 there is no separate interface for audit views. Instead normal views (see Read-Only Views) can be used to allow the application to look at historical state of the repository. They always show a consistent object graph at a particular point in time back in the past. To keep these object graphs consistent audit views only permit read-only access to the contained resources and objects.

You can also use a CDOView with an existing EMF ResourceSet:

In CDO and EMF all objects of the overall object graph are partitioned into resources which can be seen of as the named roots of a repository. Resources can be loaded into any view but they can only be created in a transactional view (see above). The resources used in CDO are CDOResources and they combine the characteristics of EMF Resources and CDOObjects, which, in turn, are EMF EObjects. You can work with a CDOResource like with any other EObject or CDOObject.

You can use CDOUtil to convert between the URI form and the resource path:

You need to handle these URI specifics only if you decided to use the EMF API of Resource which you typically obtained through an EMF ResourceSet. The easiest way to use the extended API of CDOResource is calling CDOView.getResource(String path) or CDOTransaction.createResource(String path), respectively. The most important non-transient feature of a resource is the contents collection that can be used like in pure EMF.

Since CDOResources are CDOObjects as well they can also have their own EMF proxy URI of the form cdo:id. You can use CDOUtil to extract the CDOID of a proxy URI:

This page was last modified 11:18, 11 October 2012 by Andras Peteri. Based on work by Eike Stepper, Christian Schlichtherle and David Wynter and others.