Note: This page has been succeeded by the user guide and will no longer be maintained.

Important Note The MetaABM "MetaABM" meta-model will be transitioning to a significantly changed "Acore" meta-model as part of the overall AMP project plan. At the moment, MetaABM is serving as the AMF meta-model. We'll be providing automated migration tools, so developers can use it without worry about future compatibility. To avoid having to re-edit all of this documentation, we'll be referring to "Acore" below, unless we anticipate a change in which case we'll tag that with (metaabm).

The foundation of the Agent Modeling Framework is "Acore" (metaabm). It's is designed to be a general representation or “meta-model” for Agent-Based Models. As the name implies, the "Acore" model (will be) analogous to the EMF "ecore" meta-model but provides representations that are suited to agent-based and other modeling (in the "modeling and simulation" sense of the word) oriented domains. Models can be fully defined within the Acore lingua franca and model implementations can then be generated from those models with no further coding or configuration. The system as whole currently provides a hierarchical visual editor and reference implementations targeting the Escape, Ascape and Repast Simphony platforms. MetaABM is built upon the Eclipse Modeling Framework and a number of other Modeling project technologies, including Xpand. AMF is fully integrated with the Eclipse IDE platform, but Acore models themselves need have no dependencies on any particular technology beyond XML/XSD. We do not imagine that the meta-model covers every possible model instance, or that we have not overlooked important issues.

The Acore / MetaABM meta-model is made up of three main packages. This is all based on MetaABM, and while names and important details will change for Acore, the core design should be quite similar.

Our first diagram depicts the core structural design of the MetaABM system -- again, much of this will carry through to Acore. 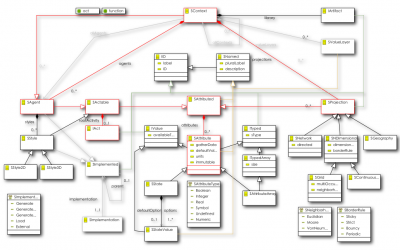 There seems to be a lot going on here, but the basic components are pretty straightforward as we can see in the next diagram. 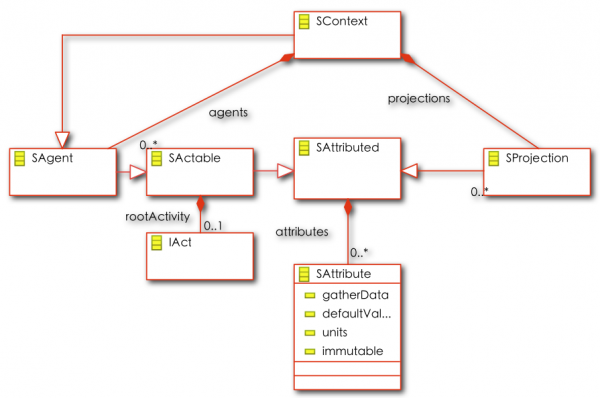 Actions are a fundamental aspect of the metaABM representational scheme, as they allow the definition of arbitrary but high level behavior for agents. They are also conceptually more challenging as unlike with structure they have no direct analogies to past agent representation -- or as far as we have been able to tell, Model-Driven Software Development --approaches. While the Acore Actions meta-model doesn't look like a programming language, it is useful to see it as a programming language without a concrete syntax. Because it doesn't define an actual concrete language implementation, it can be suitable for any number of potential text and visual languages. The default editor provided with AMF is hierarchical which isn't ideal for representing Acore Actions, but other text and visual editors are being developed and refined. Conceptually, Acore Actions is a kind of data-flow language, though the Actions design also carries aspects of functional and logical languages. 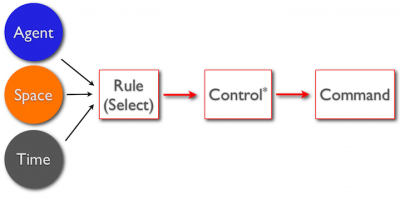 Actions represent Queries (Controls) on agents and Transformations, or Commands, on the result of those queries. Queries, Transformations and other Actions are connected in a series of sources and targets, in which each child target carries the execution and data context for it's particular path.

In the following example, we want to create a set of actions that accomplish this task for the agent. It's always easier to express these things in natural languages! Our aim is to get as close as we can to that ease of expression without losing necessary detail and context.

We define this model above in (conceptual) graphical and textual languages. No matter what tool we use to define the model in, the basic logic is the same..

Here's how the model looks in the default Acore editor. Note that we've collapsed the somewhat awkward multiple paths.

Why would we want to define our behaviors at such a high-level? There are a lot of reasons, including ease-of-use, transparency, parallelization and optimization, and all of the other MDSD goodies. You might want to take a look at what the code generated by AMF from this specification looks like in two POJO ABM APIs. 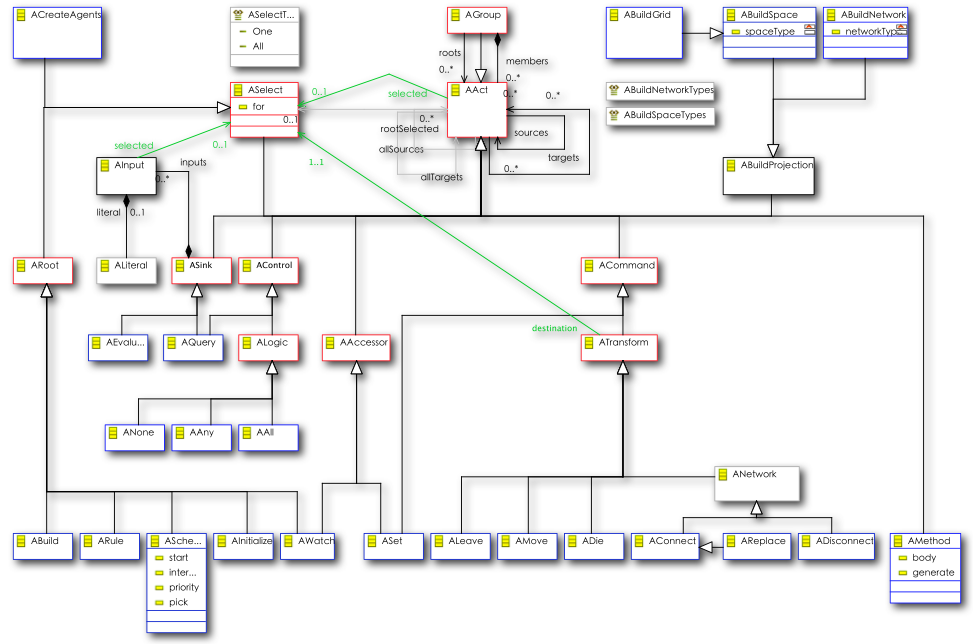 In the diagram above, all meta-objects are ActionsAInput, ALiteral, and the enumerators (lists of options) are Acts. Blue Acts are concrete (you can create and use them directly). Red indicates a key meta-object collaboration. 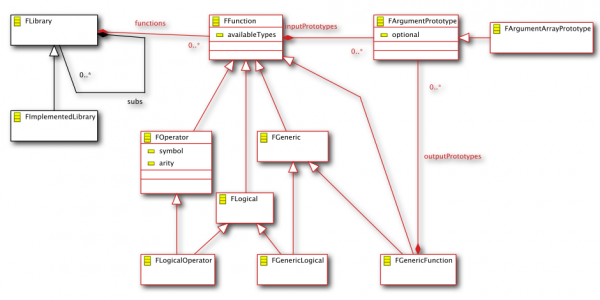 The Function representation is relatively simple. As indicated above, Functions are used by Sinks to interpret some model state. Functions are broken into two broad types; Operators, which are simple calculations sharing the same type, and Generic Functions that can represent any general function that takes some well-defined input(s) and returns some well-defined output(s). Conceptually, functions can return multi-values, but that is not currently implemented in the reference targets because of limitations of the target language Java. Logicals return some binary result and that is used by Queries to decide wether target Actions apply to a particular selection. Input types should be defined as generally as possible.

The AMF meta-model started life as "score" 1, a component of the Repast Simphony environment. It wasn't fully utilized within Simphony, and migrated from there to the MetaABM project. The MetaABM project defined a complete editor, code-generation and model execution suite that formed the initial AMP AMF contribution. Argonne National Labs supported the initial development of score and Metascape, LLC continued development of MetaABM and both agreed to contribute the relevant IP to the Eclipse project in 2009. The previous meta-models serveed as a “straw-agents” that have allowed the community to refine and explore key representational issues. Some of the following discussion is drawn from previous Metascape documentation and is released by the author (Miles Parker) under ECL.