This proposal is presented in accordance with the Eclipse Development Process and is written to declare the project's intent and scope as well as to solicit additional participation and feedback from the Eclipse community. You are invited to join the project and to provide feedback using the MDT forum (http://www.eclipse.org/forums/index.php/f/110/).

The modeling facilities of Eclipse are an essential part of Eclipse’s annual release trains. The Eclipse Modeling Framework and associated projects, like UML2, OCL, QVTo etc., are integrated into several tools both commercial and open source. In particular the UML2 project is one of the most important implementation of the corresponding OMG UML 2.4 specification. Within the Eclipse MDT sub-project further standard implementations are either already available, such as the Object Constraint Language (OCL) or announced, such as the Semantic Business Vocabulary and Rules (SBVR) or the Business Process Management Notation (BPMN). However, there is no centralized repository to host standardized UML profiles yet. As a result, lots of different and sometimes incompatible implementations of prominent UML profiles have been developed for different Eclipse-based tooling landscapes. This situation is about to be mitigated with the proposed Eclipse UML2 Profiles project as a sub-project of Eclipse MDT. The proposed project provides implementations of "standard" UML profiles and a repository in/from which to discover/install them.
This document will propose the scope and organization of the project. A project charter will be created to describe in more detail the principles of the project, the roles and responsibilities of its participants, and the development process.

The Eclipse modeling comunity has steadily matured to one of the world largest modeling ecosystems for metamodeling and modeling techniques that are based on the Object Management Group's (OMG) Meta-Object Facility (MOF). Several specifications meaningful to that community have already been implemented, maintained and provided under the Eclipse Modeling umbrella, such as EMF (as de facto implementation of MOF), OCL, UML or QVT in the first place. UML itself provides sort of a dedicated metamodeling approach, based on so called UML profiles. The UML profile mechanism has been heavily exploited for standardizing a lot of profiles pertinent to different kinds of systems (service oriented architectures, real time and embedded systems, socio-tchnical systems, test systems etc.) and to different domain-specific solutions (profile for department of defense, profile for modeling business processes etc.) at the OMG in the last years. The absence of a centralized repository under the Eclipse Modeling umbrella has led to a situation where several different, slightly varying and potentialy incompatible implementations of standardized UML profiles have been developed by different users. As a result, the interchange of UML models becomes more and more complicated, even within the boundaries of the Eclipse Modeling ecosystem. There is an urgent need for the Eclipse Modeling project to treat UML profiles, as an important niche in the OMG specification catalogue with a strong relation to industrial needs, in the same way like for pure MOF-based metamodels such as UML, OCL, BPMN etc.

The Eclipse UML2 Profiles project will focus on the implementation and evolution of officially standardized UML profiles, based on the Eclipse MDT UML2 project. This mainly includes, but is not restricted to UML profiles adopted and maintained in particular by the Object Management Group (OMG) such as the Systems Engineering Modeling Language (SysML), UML Testing Profile (UTP) or the UML profile for Modeling and Analysis of Real-Time and Embedded Systems (MARTE).
The objective for establishing such a UML profile repository is twofold:

Each UML profile implementation would comprise the UML-based model of the profile and its corresponding EMF-based implementation.

Clearly out of scope of the UML2 Profiles sub-project is any convenience tooling or graphical support for the profile implementations. This is similar to the scope of the UML2 project, which also provides the EMF-based implementation of OMG’s UML specification solely.
Being vendor-independent is a crucial requirement for a broad acceptance of the hosted UML profiles within the Eclipse modeling community.

The Figure 1 depicts the intended role of the UML2 Profiles project within the overall EMF technology stack. 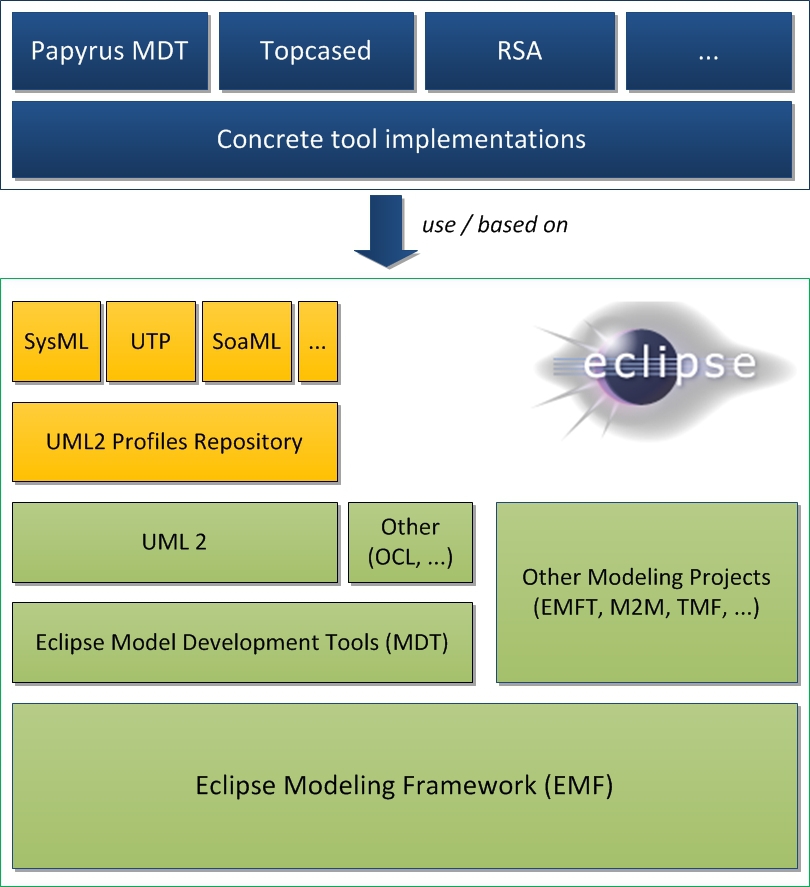 Relations to other Projects

The UML2 Profiles project potentially provides beneficial input for other Eclipse Modeling projects, such as:

The UML2 Profiles project represents a brand new project within the Eclipse modeling community. In order to keep track of pertinent activities within standards authorities like OMG, all proposal leaders and initial code contributors are member of the OMG or other standardizations and actively involved in the standardization work.
The UML2 Profiles project should be set up with a dedicated web site, mailing list and a versioning repository.

There will be an initial contribution of profile implementations.

This page was last modified 08:36, 7 February 2013 by Marc-Florian Wendland. Based on work by Michael Chonoles.