This page describes different features that have been proposed for Multi-Core Debugging. They may be addressed in the future.

This feature would allow the editor area to be configured to show multiple editors, which is possible now, but to also allow the debugger to explicitly select the section of the editor area, where to show an editor part.

The Pin & Clone feature could be useful when debugging multiple contexts simultaneously, but will not be that useful if the source from only one context will be visible at a time. Currently, the user is able to arrange multiple editor side by side in the editor area. However, there are no APIs to allow the debugger to ensure that an editor is opened in a particular section of the editor area. There are two ways to solve this:

Add context to expressions in the Expressions View 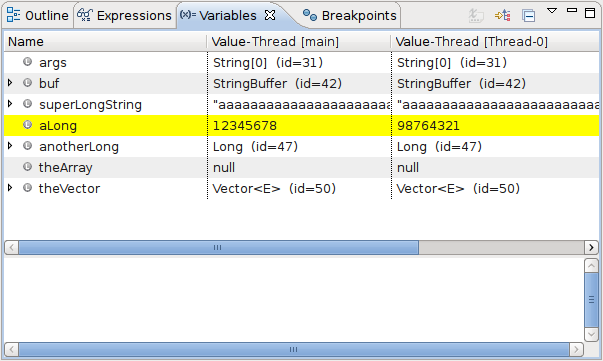 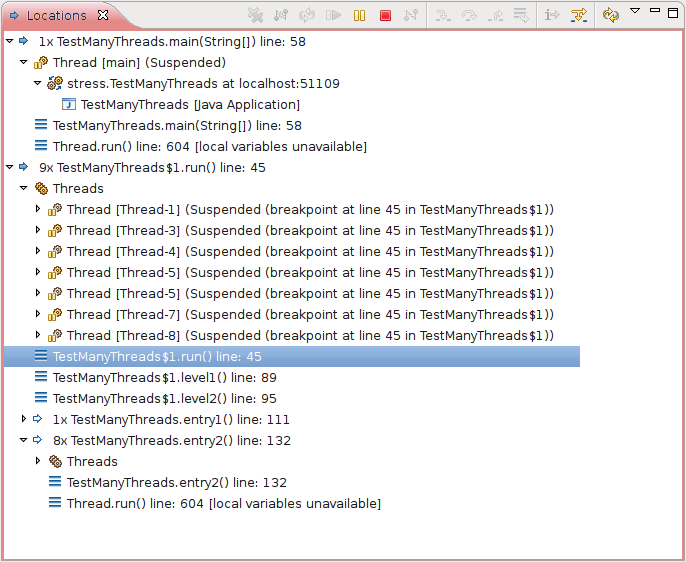 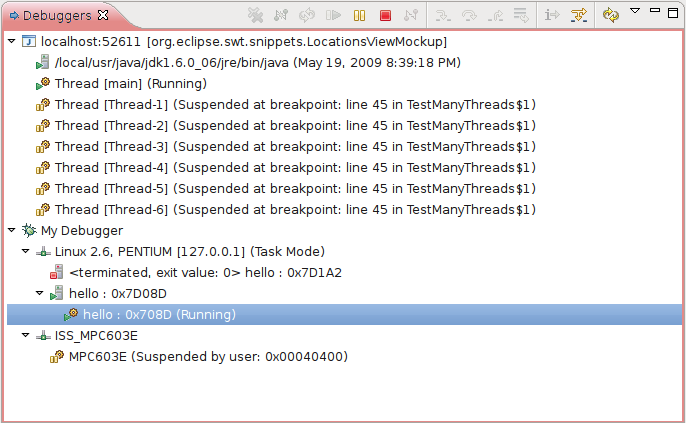 Below is a general list of enhancements that could improve multicore debugging for the CDT. If clarifications are needed, please contact marc.khouzam at ericsson dot com.

Stability of the Debug View

Ability to keep the debug view display as stable as possible for the user to quickly see what has changed. We want things to stay in the same place.

The CDT community is currently working on a feature that would allow to group elements of the debug view into user-defined groups. These groups would be used to reduce the amount of information displayed at the same time, but also to perform operations on a set of debug entities (e.g., a group of cores). Below is the list of discussed requirements.

The register view is currently limited and does not lend itself well to multi-core debugging. Below are some requirements for the Registers view.

Enhancements to the Expressions View

Enhancements to the Memory View

CDT currently offers two memory views: the standard Eclipse Memory view and a simpler Memory Browser. The requirements below could apply to one or both of these views, depending on what makes more sense.

The breakpoint handling in the CDT (and Eclipse in general) is currently very limited. The Breakpoints view has recently been enhanced to allow for a richer set of features, which are not yet being used by the CDT. Below is a list of requirements for the Breakpoints view and for the general handling of breakpoints.

The CDT community is mostly focused in enabling multi-core debugging to the CDT. However, support for multi-chip debugging would also be interesting where you have chips->cores->processes->threads. Current solution will be to use multiple debug sessions (multiple GDBs). We will need GDB support to have a better integrated solution using a single GDB; using a single GDB would allow, for example, to support synchronous control of different chips.

A new 'Watch' view would be a good addition to the CDT. This view (see ‘watch’ command in unix) would provide a way for the user to request that a console command or set of commands be executed at specific times such as:

It may be good to look at what is provide by the IAR Debugger where it is apparently possible to have a watch window which can be used to watch expressions which are updated in a specifiable interval.

Enhancements to the Modules view

The modules view is used to show the list of currently used dynamically linked libraries. The view is updated whenever a new library is loaded or an existing one is unloaded (although there is currently a bug that makes the update not happen). The view also shows information about the libraries such as file location, base address and size. Below are some requirements for the Modules view.

new proposed Watch view which would send the ‘info sharedlib’ command upon the proper triggers.

Assembly in the Editor

This page was last modified 16:06, 16 January 2020 by Jonah Graham. Based on work by David Earlam, Marc Khouzam and William R. Swanson.